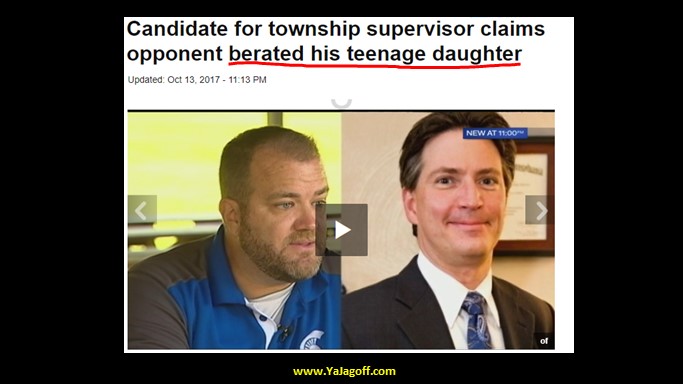 So guy on the left (above) is running for Hempfield Board of Supervisors against the guy on the right.  Guy on the right gets asked to speak at the local high school along with some others, about civics and such.  During that presentation, according to TribLive and WPXI.com, “Guy on Right” allegedly gets into a verbal tiff with “guy on the left’s” daughter (a senior at the school) during that educational session. Some accounts say that “Guy on the Right” even brought the high-schooler to tears, allegedly.

To be fair, guy on the right says he doesn’t recall seeing anyone in tears.  His official statement stated ““At no time did I sense acrimony nor did I observe anyone in the room in tears. I did ask Candidate Ritson’s daughter to ask her father about a potential conflict of interest with his candidacy,”

But…he agrees that he interacted with the student (daughter of his competitor), during a school education event, about his differences with her father; and political issues! On top of that, even his own political party buds have said, “Uh-oh, we done here!” over this issue.

Who DOES that? (Right Rach?)

C’mon Guy-on-the-Right… picking on an opponent’s kid even if she is a high-schooler?

Have ya missed the whole anti-bullying stuff?  Can’t ya just stick to the standard low-end, political trash-talking of “Your mom” jokes, posting stretched-and-twisted stories from your opponent’s grade-school days and posting a googly-eyed-this-person-looks-like-a-raving-lunatic pics of your opponent that has become the standard practice, YaJagoff??