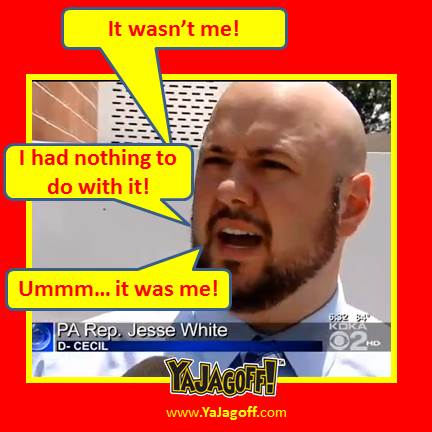 You know those quick-edit video clips jammed with a bunch of sound bites from celebrities and politicians talking about the trouble they are in?  The sound of the clip goes like this, “I will be vindicated, “I have no question, that once all of the facts come out, I will be vindicated.” “These charges are ridiculous, this is more of a personal attack on me!” And so on… you get the point.  No matter how guilty these people are, they somehow muster up the ability to shamelessly say, with a straighter face than a Sunday morning TV millionaire evangelist, that they WILL be vindicated.

This is one of those stories and I’ll try to simplify it but it is complicated.

WHEEEEEEW!!  Getting exhausted writing all the details, you can go see the full KDKA story, including Rep. White on video, HERE!

Spoiler alert!  This ends with Rep. Jesse White of Cecil, issuing a statement, shortly after, that he made the posts!!!
Haaaa..haaaaa..haaaaaaa… SNORT…haaaaaa… pee-trickle……haaaaaa!
Who woulda THUNK IT?????  I live for this kind of stuff

The saddest part of this whole thing is that this guy is representing people at the State level and he left a trail of evidence that even Helen Keller could have found!!!  It’s like a kid:
Mom: Did you poop in your pants?

Mom: Are you sure?

Mom: What smells like poop in the back of your pants?

Representative White version….
Sheehan:  Is this you writing this?

Sheehan: Are you sure?

White: I know what you are, but what am I? Naah..naah!
By the way, I looked up the phrase, ” I know what you are, but what am I?” on the Urban Dictionary.  It definition is a PERFECT description of what Andy Sheehan did to Jesse White:
A complete fail of a comeback… basically… you would use it when you get verbally bitch slapped your face is all red… and you cannot come up with a comeback.
Hey WITTY-White, nobody said ya had to be a MENSA member to be in the House of Representatives but, when we send someone to Harrisburg to rep us, we SURELY hope that you’re smarter than the plastic name tag on your office door.  Please do us a favor, if you happen to resign from the State seat, which you should do, please don’t bring in a note that says something like, “Jesse is not able to make it to work today.  He is sick.  Signed, Jesse’s Mum” Ya Jagoff!

NOTE: Hey grandma Janice, we never encourage any nastiness so, if you want to get back at WITTY-White, start using the photo below as your profile pic for all of your posts! 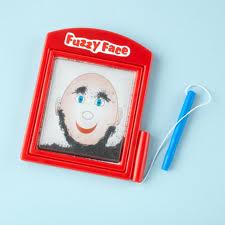