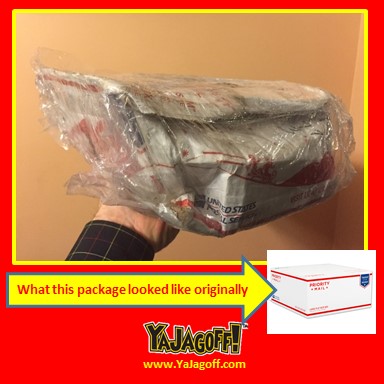 If you’re new to this blog, you may not know that, at one point, I had 2 chances to attend the Hawaii Annual Social Media Summit.  A lot of this thanks to my buds Gwen and Karen of Wahine Media.

On my last trip there (more than a year and a half ago) I promised to send them some Jagoff t-shirts.  Just before Thanksgiving of 2014, I finally remembered to send the damned things… I attribute this random restoration of memory to my decision to start using Almond Milk, a healthier alternative to regular milk, to dunk my Oreos in.

Earlier this month, I emailed them to see if they had received my trivial little surprise of shirts and found out zippo, nutta, zero, a wholelotta nutthin had been received.  And had I kept the tracking receipt?  Nope!

Yesterday, I came home to find the squeaky clean priority mail box bundled as if it had been carried cross-country during a tornado and used as emergency shelter by one of those idiot pizza delivery guys that carries the boxes sideways like school books.

The notes on the package say “Incomplete Address” etc, etc.  So I get it.  They couldn’t deliver it for some reason DESPITE the fact that I have confirmed that the address IS the Wahine Media address.

But, did they have to have 48 circus elephants stand on the box as it was making it’s way over the ocean from Pittsburgh, around the island looking for a lounging spot and then back across the ocean and the main continent in a depressed state, as all of us might be, as it left Hawaii REJECTED to be returned to January in Pittsburgh?

For crissakes….it’s more wrinkled than a 98 year-old woman who moved to Hawaii when she was in her 30s and tanned with nosunblock since!

Thanks USPS for the special handling of my Priority Box package! If you were going to drag the box around Hawaii, the LEAST you could have done was included some beach sand and a chunk or two of pineapple or before ya sent it back all wrapped up in plastic, Ya Jagoffs.