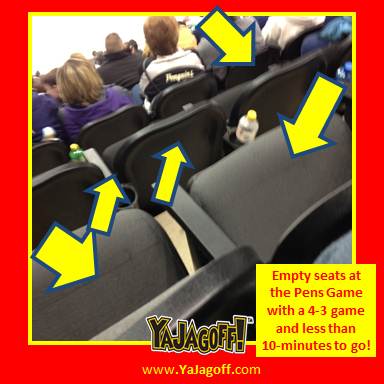 So got invited to my first Pens game of the season.  Great deal.. free parking, great seats, coupons for food and even better, someone else drove! Twas a great night!

We ran into a few potential post ideas for today.

1) the driver who slowly creeped through the intersection on Center despite the traffic cop repeatedly yelling at him to stop the car.  Not only did he not listen to the cop, he ticked off the cop so much that he kinda lost track of the process and I had to stand on the cold corner even longer.

2) the guy who, while we were standing at the top of a random arena section, gazing at the warm-ups and sipping on a couple of beers inadvertently blocking the passage to his seats, made a big, snarky deal about us being in his way and then, completely ignored my 3 attempts to genuinely apologize but, on the 4th and sarcastic attempt, acknowledge me with a “no big deal” comment.  If it was no big deal why were you a snob about it in the first place?

But, taking the lead from our twitter friends, Jagoffs Leaving Early , I had to point this out once again.

The Pens have become so popular and prices to the good tickets have become so high that, it has become a “status symbol” to own hockey tickets.  Similar to driving a Double-crew-cab, full-time 4 x 4, double hemi-something-or-other pick up monster truck at current gasoline prices!

The point, hockey die-hards find it hard to get to games and, when they DO get to games, they are so000000000 glad to be there that they stay, not only until the end of the game, but almost until the crews come by with the brooms to clean up all the food left under the seats.  (As a side note, do people eat like that at home or are they just sloppy eaters at arenas and stadiums?)

And last night, you had a game that was close in score, closely played, late in the third period and, people like the people in front of us, made the choice that beating traffic was a priority.

Traffic?  Junior has to get up early for school? Gotta pee before I head out for that  long ride home?  All those beat watching the end of this game?? Can’t understand this at alllllllllllllllllllllllll!

So, to those Early Exiters and Exit-trixes that are all decked out in their expensive Pens gear vs. the die-hard sitting there in their Barrasso and Pronovost shirts, here are our thoughts……

If we paid $200/ticket OR were GIVEN a $200/ticket to see a Pens game, we wouldn’t give two @#%#s  about traffic or getting home to get our make-up or those uncomfortable dress shoes off.  We’d still be clutching to the seats as the janitorial staff were trying to clean up the spilled popcorn 3-hours AFTER the game ended.

Stay home the next time so that, as the final minutes wind down, I don’t have to watch you gather your things, hug, kiss, look around the section to waive goodbye to your friends and BLOCK MY VIEW of the game, Ya Jagoffs!

One week left to order.  Click the pick to find it on our store!