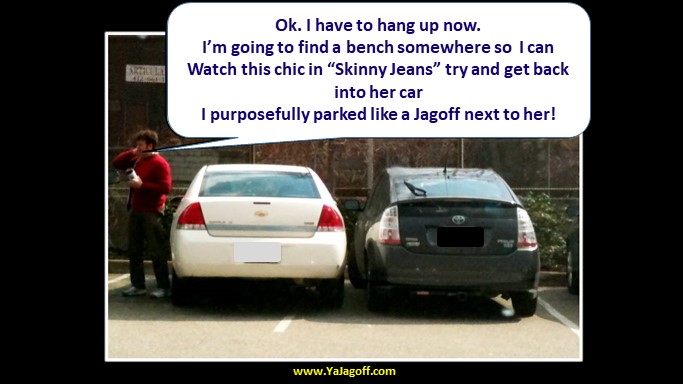 The picture says it all.

Guy gets out of car and, despite the fact that he has room to salsa dance between his car and the white line of his parking space, he is completely UNCARING/UNWAWRE that, on the OTHER side, his car is OVER THE WHITE LINE.

Guy parks SOOOOOOO close to the previously parked Toyota, that you could barely squeeze a stack of 5 years’ worth of “positive-feedback comment cards” about the Allegheny County Port Authority, stacked sideways with a pile of “Good-news-about-Sid-Crosby” articles collected over the past 18 months, inbetween the two.

We wonder how Mr. Red-sweater would do with THIS game?

Seriously Red-Sweater Guy here’s what we’re guessing, you’re not just IG-NERNT, you’re just AWFUL at spatial awareness. So awful that, your socks are probably on SIDEWAYS– to the point that the colored-fitted heels are squeezing out of the back of your shoes. You probably stack your drinking glasses SIDEWAYS in your kitchen cabinet, you probably INADVERTENTLY invented the sideways-ball-cap fashion, you probably have a hell-of-a-time stuffing your self-addressed-stamped-envelopes into your EMAIL BOX and your boxer-briefs are probably on backward, or even sideways, which is gonna make any upcoming emergency peeing process a total travesty.

Forget about the famous “Pittsburgh Parking Chair,”you could put an IKEA futon in that parking spot WITH your car. Learn how to park, Ya Jagoff!!!!!