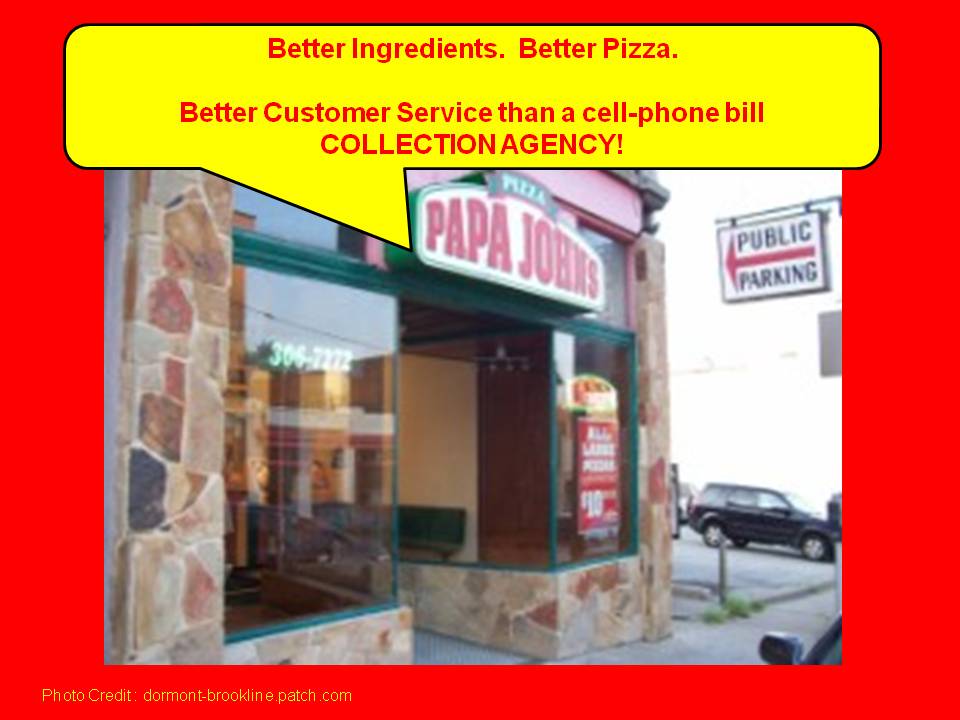 From reading this blog, you know that we love to call out when people treat others poorly.  ESPECIALLY, when we’re pointing out poor customer interactions.  (Remember our USAirways post? If you don’t there’s a REFRESHER link at the end.)

So we got this on a tweet, then details in an email, about the “SERVICE” from the Dormont Papa John’s.

Lately every time we order a pizza from these jagoffs they seem to have some kind of issue. I was yelled at (as in voice raised, actually yelling voice) because the
delivery guy couldn’t see our house number, which is funny because no one else has ever had an issue and there is a light (which was on) directly above it.
Hmmm…

This time I placed an order online. Apparently after accruing 25 credits, you are eligible for a free large pizza. We don’t order very often, but apparently I racked up 102 credits in the last year or so without realizing it.  The online process does not mention your credits during the checkout process, so I didn’t think to look at it until after I placed the order. Realizing I had credits, I called not even 30 seconds after sending the order over the internet. The guy on the phone was super snarky. I didn’t understand what he said initially and when I asked him to repeat it, he was like “YOUR NAME, MA’AM!”   When I told him what happened, he got all angry because it was “already in the system” and he had no control over it. I asked him if he could just cancel my order and I’d run it again. In the nastiest tone I’ve ever heard out of someone whom I just gave money to, he said “Well, you COULD but we already started the order.”

The email went on to say that customer was going to kindly explain to this fine, outstanding, Disney-and-Ritz-Carlton trained Papa John employee that it was OK that he had already started making the pizza because she was GOING TO ORDER THE SAME THING ANYWAY!!!!!  (Isn’t there some famous line about what is/is not “rocket science?”).  Instead, she hung up and did EXACTLY what anyone that frustrated should do…. SHE CONTACTED US!!!!!!!!!  (Yaaaaaay us!)

First, we realize that some customers can be, well, TRYING to say the least, AND we recognize that the customer is NOT always right.  But YELLING at, and being completely disgusted and put-out because a customer wants to use their, say this slowly, LOOOOOOOYAAAAAALTEEEEE REWARDS POINTS, seems to miss the whole point of Loyalty Rewards Points!

Second, we thought, if these pizza people are so insanely miserable, “How in the Cleveland” do you have sooooooo many loyalty points???  (Did ya like that “How in the…” substitute?) But, it’s that typical Pittsburgher – continue-to-be-nice-and-do-your-best-to-support-the-locals-just-like-we-do-our-Pirates mentality.

While the submitter is anonymous, we are very secure in our thoughts that this post did NOT come from a competitor staff member who has experience in political advertising!!  As always, we do not support any kind of boycott of the Dormont Papa John’s.  Alternatively, we suggest someone go there, with one of our Don’t Be A Jagoff t-shirts on, and get a pic with an unsuspecting manager and post it on our Facebook page! (Prize?  Did someone say prize for doing that?)

In the meantime, Papa John’s in Dormont, you might want to check out some anti-stress classes offered by Highmark or UPMC —and get it now before they drop each other!  Because if you’re this uptight in November, we don’t want to see you throwing mozzarella and playing “Occupy Dormont” when ya get REALLY busy during heavy pizza season every Friday during Lent, YA JAGOFFS!