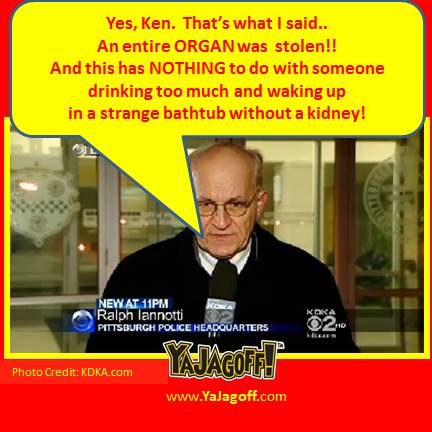 (For reference, the thing was probably about as heaving as a whole Gullifty’s chocolate cake.)

This story causes us to pose the rhetorical question, “If a pipe organ gets stolen in the middle of the neighborhood, AND NOBODY HEARS IT GETTING STOLEN, is it STILL stolen?”

In case you are unaware, a janitor in a closed Mount Washington Church, the other day, discovered that the pipe organ was missing.  As you would see in the KDKA-TV story by Ralph Ianotti , the thing was also on a 2nd floor balcony!!!!!!!!!!!!

All I know is that, I want to move to that neighborhood because it is CLEARLY the best Pittsburgh neighborhood for SOUND SLEEP!!

Seriously, how sound do the neighbors sleep that not a soul heard or saw ANYTHING for the entire time that it took these burglars to dismantle that thing, carry out down from the second floor, load it QUIETLY into a truck and haul away thousands of pounds of pipe-organ?

So many parodies, so little blogging space. (Hey, pssssst, over here, pssssst, pipe-organ parts, only fie-dolla!”)

Hey, organ-burglars …. turn yourself in!!!!!  We will represent you!!  We have a plea bargain that not even Jim Ecker would think of.

First, tell everyone you are demolition experts.  Use the Saint Justin Catholic Church pipe organ example as your resume.  Then, tell the Allegheny County and Pittsburgh politicians how you could have saved all those Civic Arena legal costs if they would have just hired you guys for one night, to STEAL THE CIVIC ARENA!!!! (All the hysterical-historical-protesters “It was just there YESTERDAY!!!)

Now the ONE problem you guys DO have against ya… What in THEEEEEEEE HELL do you do with thousands-pounds-of-pipe-organ  now that this has made the news?

It’s gonna be a little hard to hide those pipes in your pants on the way to the scrap yards and pawnshops, YA JAGOFFS!!!!