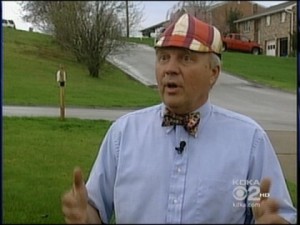 (Click HERE for Link To Story If You Must)

KDKA-TV ran this story about retired engineer, Tom Galownia, of Cecil Township who suggests we could MOVE THE CIVIC ARENA!!!!!!!!!!

But wait!!  Not sure if I am laughing more at this concept, or the fact that SOMEONE at KDKA thought this was “news,” OR the hat and bow tie ensemble Tom chose to wear DESPITE the fact that he KNEW the news was coming to take his picture!!!!!!!!!

According to “engineer” Galownia, to move the arena “all ya need is a 500-ton crane!”  Yeah, what the heck?  That’s all ya need!

Tommy-boy, you are a cute, senior man and probably someone’s grandpap so I MUST respect that and go easy.  But I am completely perplexed as to how you convinced, typically respectable, KDKA-TV to run this story AND the fact that they even followed up the idea with a real architect discussing how UN-feasible this is!

Tom and KDKA-TV, new idea and story to cover: since the Pirates did so well at Three Rivers Stadium, let’s rebuild the 3 Rivers Stadium in Bill Mazeroski’s driveway.  We can ask everyone who kept an old stadium seat, a swatch of turf or a memorabalia chunk of concrete to return them ASAP via those US Mail “one size ships all” boxes.  Within 10-15 years we will have MOST of the stadium back together AND a Pirates winning season.  In the meantime, KDKA, could we please keep the engineering story topics credible, like interviewing Choo-Choo Charlie The Engineer of Good n Plenty fame,  YA JAGOFFS!!!!

NOTE: Mr. Galownia, please read John Steigerwald’s story in the Washington Observer Reporter about dressing appropriately – you may be THE ONE PERSON, that his story applies too!!!!!!

Steigy “The Elder” Fell Off of His Rocker