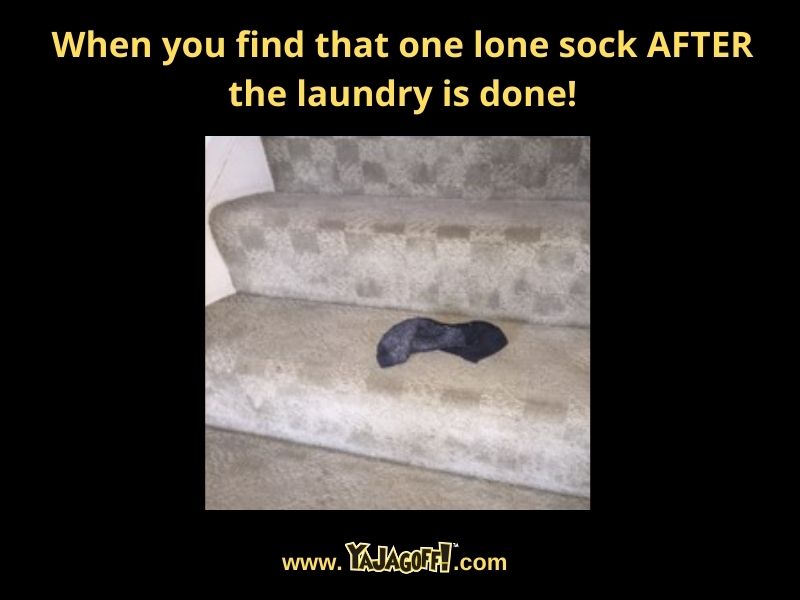 SCENARIO:  You hike the dirty laundry down to the basement washing machine.  It’s not too big of a deal because I don’t have a gazillion clothes.  I have the minimum amount of clothing required by law.

After 45-minutes of washing and 20-minutes of drying…it is  time to take the darks back up to where they started and, BOOM!  There’s a dirty dark sock that I dropped on the way to the washer!  You sneaky little @#$%!  Staring at me… laughing at me… just laying their like a slug where you have been the entire time I was doing the rest of the laundry and other work around the house.

Now, I not only have a mismatched sock somewhere, I have to put you back in the laundry until the next load of darks. ( I have half of mind to throw you in the bottom of the laundry bin with a wet towel and sweaty underwear and make you suffer for the next 27 days.)

Hey sock, it ain’t bad enough that you escaped the water torture by trying to emulate goldfish suicide, but do you have to lay there and eyeball me?  Why couldn’t you have just thrown yourself out in the middle of the road like the other single socks do so that I wouldn’t have even known you were missing, Ya Jagoff?