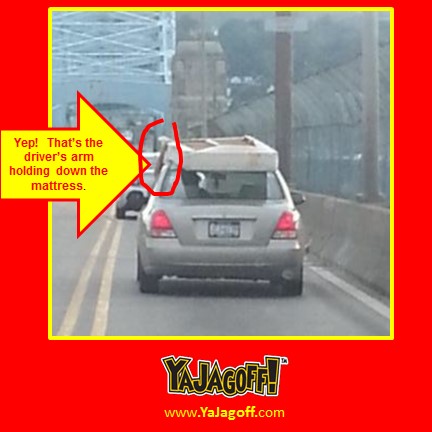 Have ya ever heard of the “one-armed wall-paper hanger?”  Me thinks he went out and bought himself a new box spring.

Or is it that, “Two Men and A Truck“ delivery  now has a 1/2-priced competitor, “1 Man And A Sedan?”   But thank GAWD they are following the OSHA protocol for delivering a mattress or box spring… holding it with one arm while driving across a bridge!

I mean, not even Sid Crosby’s forearms could hold that thing if it flips or slides and he’s been squeezing tennis balls for forearm exercises since he was 6 months old.

Is this driver an octopus that is also holding a cigarette, cell phone, eating a donut and holding a coffee that also has a yip-yip dog on his lap?

Is this driver one of the retired X-men, Bungee Cord man?

C’mon sedan man Stan, everyone in Pittsburgh has at least one “friend with a truck.”

But just a quick question…. inside that car, are you driving while sitting on a night stand?

Get on the internet and find a truck, Ya Jagoff!

Thanks to @DaStayHomeMomma for being our Honorary Jagoff Catcher today.  Great pic.