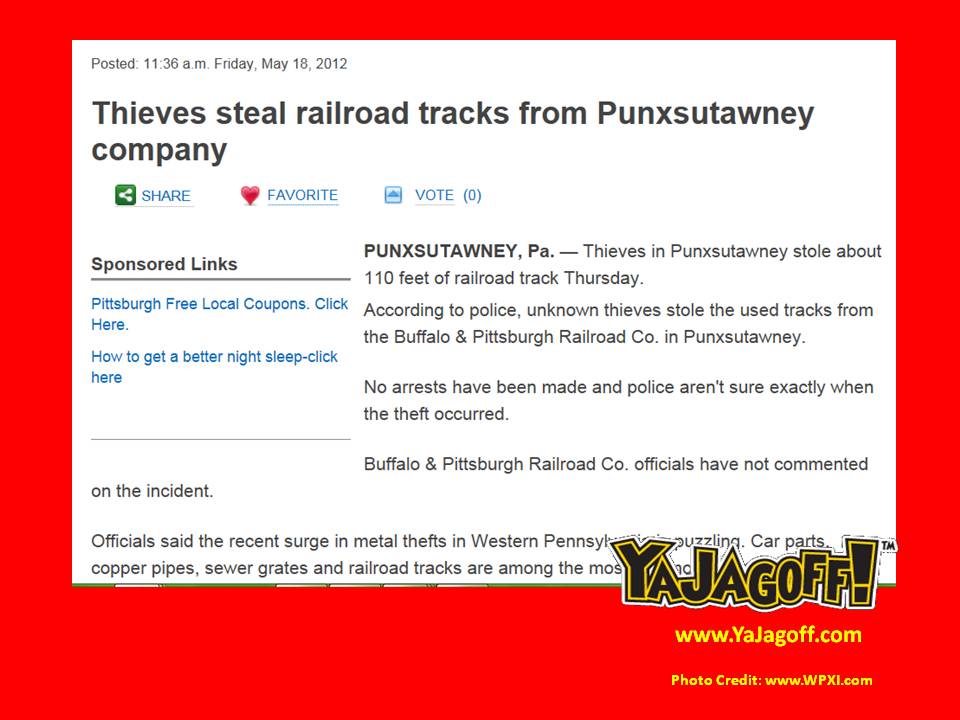 We almost missed this story.  Thanks to the Val Porter at WDVE for being noble enough to, as our grandma would say when we were coughing, “bring it up!”

Somehow, some thieves near the Punxsutawney, PA area stole some railroad tracks.  Not your grandpap’s Lionel Christmas train tracks that have been in your basement.  Not just a few rails either.  We’re talking about 110 feet of used railroad tracks! (WPXI Story)

QUESTION: How remote is this railroad track if not one soul heard/saw ANYTHING going on… including the Dozen Bake Shop and Franktuary trucks that were probably supplying refreshments during the process? (Not implicating them.)

Now one might say, “Hey, they’re probably doing it for the metal exchange rate!”  Yeah, we get that but, our question is HOW…. as in how in theeeeeeee hell does someone steal a set of active railroad tracks?

Once again, so many parodies, so little blogging space. (Hey, buddy, pssssst, over here, pssssst, need a railroad rail, only fie-dolla!”)

Hey, rail-burglars turn yourself in!!!!!  As we offer to most stupid criminals, the writers of YaJagoff.com will represent you!! We have a plea bargain that not even Jim Ecker would think of.

First, tell everyone that you are consulting with the Port Authority North Shore Connector “Specialists.”  Use the stolen railroad as a sample of your work. Then, tell the Allegheny County Port Authority PSEUDO-leadership that you are willing to take the North Shore Connector off their hands in one night if they can just keep the beat cops “busy” for an evening.   You steal the North Shore Connector, fill in the holes on both sides of the river and BADDA-BING, Allegheny County turns in a huge insurance claim for their stolen North Shore connector–minus their $250 deductible!  (Cue the politicians who will stand shoulder-to-shoulder taking credit for how THEY have a plan to fix the County budget woes!)

Now the ONE problem you “rail-roaders” DO have against ya is, what in THEEEEEEEE HELL do you do with 110-feet of railroad track now that this has made the news.  Good luck hiding the rails under your mattress or in the garage next to your grandpap’s Lionel trains, YA JAGOFFS!!!!

Thanks to Val Porter, WDVE for reporting this story!!!

Don’t forget to order your “This is MY Chair, Ya Jagoff” chair for vacation!!!