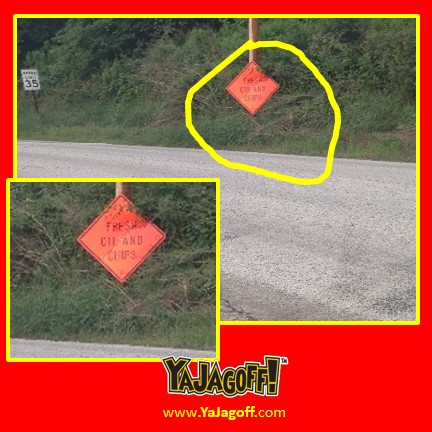 Because of all of the local “chipping” activity, I’m re-posting this post from last year.  Chipping makes me nutzzzzzz.

I realize that the only thing I know about being an engineer is the fact that Choo-Choo Charlies was one.  And he’s probably retired by now and probably has dentures from eating those  nasty Good and Plenty candies!  Does anyone still eat that stuff?

The only thing that I know is that, right after oil and chipping, the road is extremely more hazardous , than BEFORE the oil and chipping, for about 2 weeks until all the brand new pebble-sized gravel, that probably cost a fortune to put on it.. IS GONE!  Gone as in embedded into car tires and paint. Gone as in kicked to the side of the road or the center because of the traffic or even WASHED down the road into the sewer after a big rain

What IS the deal with oil and chipping.?

It doesn’t seem like something that we would use as a demo project when we first meet up with  alien life forms to show how SMART we are  during their weekend jaunts to earth for the Rogers Flea market!! I just don’t get it.’

I get the idea of when you put down asphalt on the road.. you can see that it’s a better road… well at least for the first two weeks until the gas or electric company come out within 2 weeks and randomly  dig up some manhole covers for no good reason.  Where as, if you put down oil and chips, it makes the road SLIPPY from the stones , from the  oil AND the oil and stone,s mixed together.

Mr. Guy, or Ms. lady, in charge of the Western Pa road face lifts,  can you please explain the sense behind applying oil and chips only to have it all gone, and the same pot holes that were there before, STILL there?

If we can’t figure this out, can we at least agree to put up more honest signage, like the one below, Ya Jagoffs! 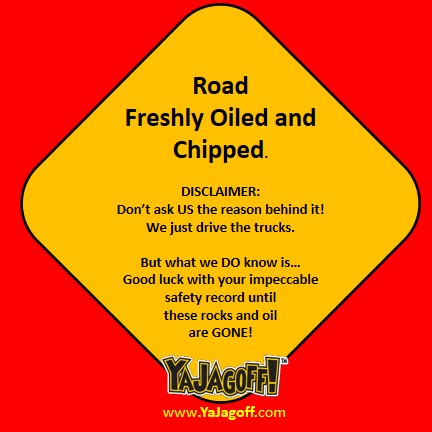