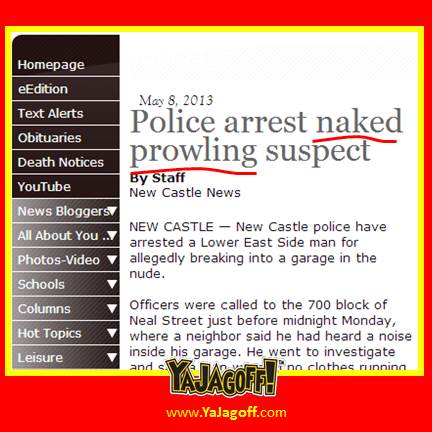 So this 24 year old guy ALLEGEDLY was caught breaking into and  prowling in a New Castle resident’s garage.  And when he was found out, he decided, ALLEGEDLY, ran through the neighborhood naked and tried to hide on another house’s porch.
This story brings about soooooooooooooooo many questions like… if he was naked, where did he keep his locksmith set that he used to pop the lock?  Or, if he was going to steal something, in what pockets was he planning on stashing his bounty when he left?  Clearly he didn’t plan this one out very well.
But what would have been some of his excuses for being in the garage and naked?

“Hey there neighbor, I was in the shower and I locked myself out of my clothes closet.  I didn’t know if you were sleeping and was hoping you might have a crowbar for me to use.”

“The wife and I were trying something new next door, I was looking for a second pair of vice-grips.”

“I just saw a hair growing secret on the internet, I was looking to see if you had any Turf Builder?”

But those excuses all seem sooooooooooo silly! More than likely his defense will be something more reasonable like, “O damn!  Did my invisible potion wear off?”

Well Naked-New-Castler, being a naked burglar might have appeared smart… it certainly gives you  a chance to claim anonymity when the cops show up because you can’t find your wallet!  On the other hand, it seems quite stupid because now you will be entered into the New Castle “penal system.”  And guess what else? You’re now the BUTT of our jokes, Ya Jagoff!

Thanks to Mary Mac of Mary Mac’s Bakehouse  for being our Honorary Jagoff Catcher for today!