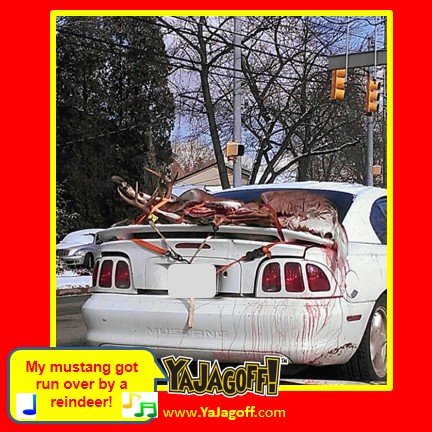 Yeah.. it’s deer season. I know to expect some awkward sightings on the highways.  But this??????????????   A deer on the back of a mustang… is that some kind of new aerodynamic thingy?

Ya know… I don’t get the hole hunting thing.  I actually prefer walking into the local grocery store to buy some meat vs. getting up early, sitting in the cold and spraying myself with animal urine.  But, I respect those who enjoy hunting and fishing.

Well… except for this hunter.  Do you think this mustang-deer-carcass-haulin’ hunter/driver also has Ugg hunting boots from Little’s Shoe Store in Squirrel Hill and Burberry accessorized hunter orange matching belt and gun bag?

I’m sure your fellow commuters appreciate this too. I swear I saw a similar scene last week in The Walking Dead.

Hey Mustang Sal E (yeah I just did that) or is it Mustang Sam?  I realize most hunters head off to the tree stand with big dreams  of bagging a deer but with the reality that they will only go home with an empty chili crock-pot.

Since you have that thing strapped to YOUR car, it makes me wonder what were your other hunting buddies driving.. bicycles, smart cars and skateboards? You’d think at least SOMEONE you went hunting with would have had some kind of truck to haul that carcass home or at least and old carpet to roll it up like De Niro in Goodfellas style , Ya Jagoff!

Thanks to @msCarroll63 on Twitter for being our Honorary Jagoff Catcher today.