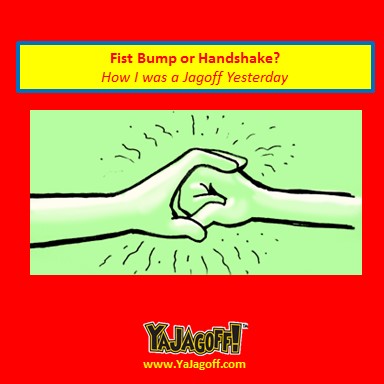 I don’t really consider myself to be “worldly.”

On the other hand, I don’t consider myself to be socially inept either.

I mean, I can kind of handle the pressure of awkward greetings…with old high-school friends who recognize me but I don’t recognize them (despite like-ing photos of their kids on Facebook), ex-spouses, friends of ex-spouses, people that know me from previous jobs that I don’t recognize (despite being connected with them on LinkedIn), old bosses that don’t have the same spouse and I address them with the ex-spouse’s name….etc, etc.

I’ve even mastered the concept of running a well-disguised end-around play when asking the name of a new baby and not falling into the name trap by asking the stupid question of “What’s her/his name?”

But what I haven’t mastered is…….whether to shake, shake and hug, or fist bump. I blew it again yesterday.

I was all excited to meet a former co-worker.  Like a movie, I saw him from 25-feet away and we both went in aggressively…moved in… “Hey man!” yelled to each other …closing in quick….the “You look great!” “You too, man!” and then we were within arms length of each other aaaaaaaaaaaand….I put out my hand aaaaaaaand he put out his FIST!

We kind of looked at the fluttering hands with an awkward pause as if we were doing some form of secret lodge handshake maneuver and then glossed over it moving directly to How-in-the-heck-have-ya-been-I’ve-seen-your-kids-on-Facebook conversation.  It was great to catch up.

But then… back at home…5 hours later….I still hadn’t resolved the issue in my head.  We never addressed the handshake miss.  I was tortured mentally from the failed greeting attempt.  Did he judge me now?  Did he go home thinking I was socially inept?

My stomach’s still in turmoil from the unresolved tension.  I probably won’t sleep for days. So here’s my cathartic move… a “missed connection” posting:

walked into the lobby.  right away we recognized each other.  I kicked the leg of a chair as I made my way toward you and I made a complete fool of myself when I came at ya with my right hand looking for a handshake and then you come up with a fist bump.  I should have just grabbed your hand with my palm and said, “Paper beats Rock.” and then we could have moved on.  But now, I am chastising myself for the awkwardness.  If you see this, please give me a call, text, message, that says that you don’t think that I am socially inept.  Do this soon before I end up in an Opus Dei type self-torturing mode in my basement!  If nothing else, can ya please go to my LinkedIn page and give me a badge for “Champion Rock, Paper, Scissors Player?”

Any of you have this problem?  Or am I the only Jagoff?

STROLL INN PIZZA WINNER
Yesterday on Facebook, we posted a contest.  Whomever shared the picture of the Stroll Inn Pizza before the Steelers/49ers kickoff, was eligible to win a free pizza from our friends at the Stroll Inn in Kennedy Township.
I put the eligible names into my STANKY old Pens Stanley Cup Champions hat and the winner is: