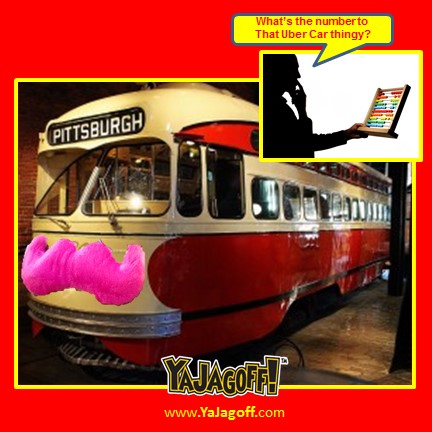 Just a simple pic today of where the Pennsylvania PUC has put us regarding ride-sharing.

If you haven’t had your eye on this, Lyft and Uber have come to town and have been welcomed by many.  Basically because Taxi service in the area isn’t really a SERVICE.. it’s more of a inconvenience to the customer.. expensive and down on the company’s terms (just like the airlines operate these days.)

Yeah we get it that the Uber and Lyft antagonists want to say, (use your childhood whining, I lost at ocka-bocka-soda-corcka kid whining voice) “those guys don’t have to pay what we do! It’s unfair.. blah.. blah.. blah”

“I’m not only a supporter of Lyft and Uber being in Pittsburgh, I’m also a user of Lyft and Uber. I think they fill a critical need in transportation within the city of Pittsburgh,” said Peduto. “I’ve had conversations with the chairman of the PUC, who also believes that ride-sharing programs, such as Lyft and Uber, have a place and (he) has assured me that the PUC will adopt changes to allow it to happen.”

Peduto said the PUC is adhering to antiquated guidelines that need to change.

“What has to happen is, the rules that the PUC allows operators to create programs like ride-sharing, which didn’t exist when those rules were written, to be adopted and changed to meet the times,” said Peduto. “What they can do is put in temporary rules that allow that time period between the changes and now to happen so that ride-sharing can continue in the city, and that’s what I’ve asked the chairman to do.”

Thanks for setting us back there PUC and judges.  Appreciate you ol’ goats “saving us” from ourselves!  Who wants to be current anyway?  There’s no good in that!  Whaddaya say we just wait to adopt ANY new things until after the Amish community adopts each them, Ya Jagoffs.