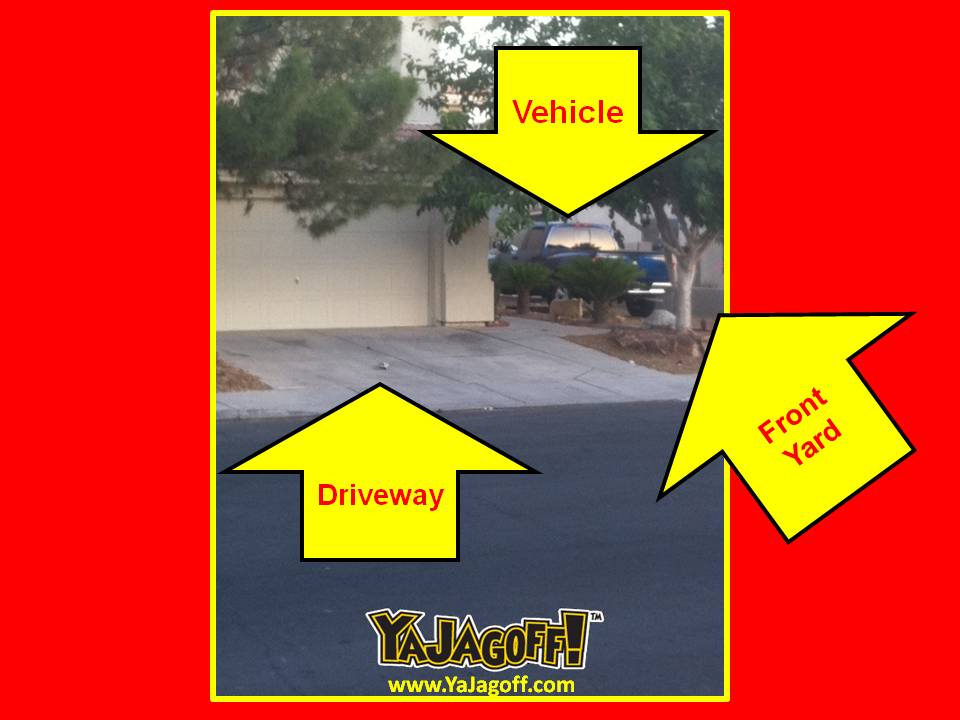 It’s been a while since we had someone offer up one of their neighbors for a post.  This one comes all the way from Las Vegas and it’s within the guidelines of this blog because it’s a relocated Pittsburgher that submitted the pic.

It may be hard to see so we used the Jagoff-estrator technology to point things out.  What it shows is a wide open driveway and, the houseowner’s truck sitting in the yard.  This is the email that came with the pic:

I live in Las Vegas & thought this new neighbor of mine deserved some merit.  He seems to think it’s normal to park his big bad Dodge truck in the front yard versus his driveway. As you can see, his house does have a driveway. He’s been here 2 months & continues to make the neighborhood look like we’re in the sticks or something.

Haaa.. it looks like he DOES use his driveway for something.. “beer can target practice.” Guessing he just started a new game and currently has 1 point in the opposite square.

Hey new-neighbor, don’t you know that you’re not permitted to park your vehicle in your front yard UNLESS you’re gonna pull the wheels off, put it up on blocks and then sit around on some piece of stained, upholstered furniture while you drink afternoon beers and talk about the parts you have to go pick-up at the junk yard?

Here’s our perplex-ment…… sure there’s a driveway BUT there’s ALSO  garage!!!!!!

We’re guessing that the garage is as full of s@# …like more full of s@# than the Port Authority’s Steve Bland and, the reason the guy doesn’t park his truck in the driveway is because, if the garage door was to open suddenly, the truck would be caught in suddent wave of used coolers, yard tools, bocci ball and volley ball kits, bags of unused clothes, bundles of newspapers and, since this is Vegas, unregistered foriegn landscapers!

Hey new neighbor, the bookies are now on this… it’s now 15-1 odds that  you’re originally from West Virginia, Ya Jagoff!

Thanks to Tammy Harper, Las Vegas, NV for sending this in and being our Honorary Jagoff Catcher today!!!