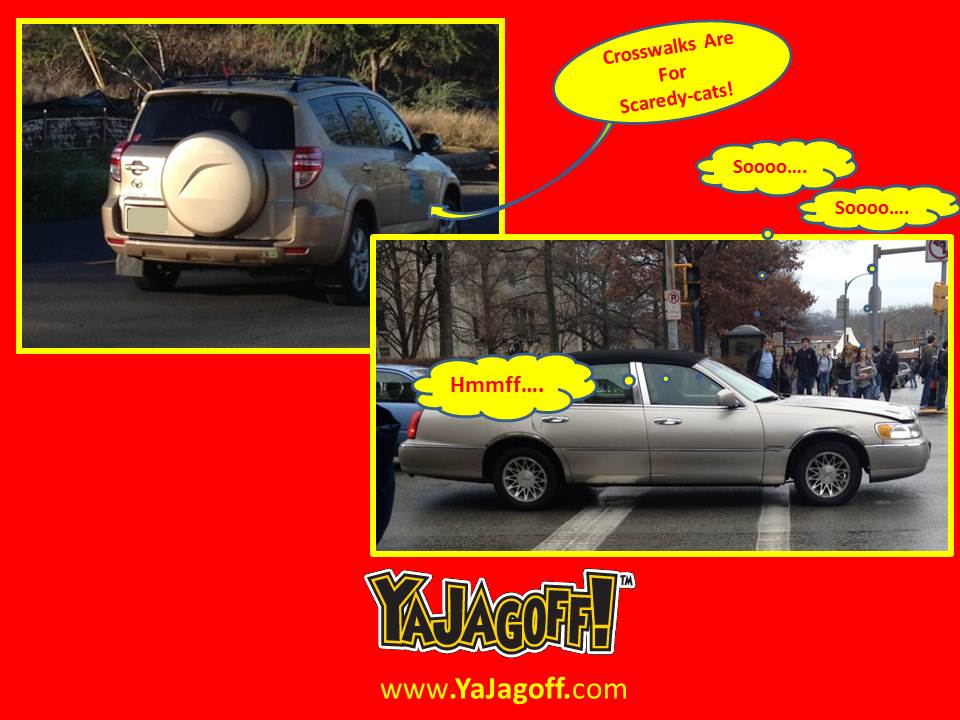 As we have said before, we are making HEADWAY with spreading the Jagoff deputizations!!!!   The photo on the left above is from our Hawaian friend who seems to always have her Jagoff smartphone phaser set to “STUN!”  She’s faster with that thing than 5-0’s McGarrett is with comb full of mousse.

This is the text that came with the photo:

I was halfway across the crosswalk when this guy sped over to make a right.

I’m still laughing at the fact that she’s in the middle of crossing, the character flies by her while she’s crossing and she still has piece of mind to SNAP A PIC vs. THROW her phone at the driver!!!!

Then, we have the other pic from the Oakland campus of the University of Pittsburgh, of the older gentleman, who, because he has nothing else to do with his money, purchases a car the size of an aircraft carrier and thinks that the crosswalk lines are the lines he’s drawn on his garage floor at home that tell him when to stop so that he knows the garage door will shut over the back of his way-too-big-to-drive coffee-gitter that he has no idea how to judge!

We’re not sure but we love the SCARED STRAIGHT method of retraining in these instances.  Just think of it, what if the crosswalk markind were actually steel bars that, with a push of a single button, would jut up and down out of the ground, bouncing and flinging the vehicles that invade them illegally!!

Those kids accross the street, tell me they wouldn’t love to see something jump out of the grond and start ROCKIN’ that car up and down like a hackey sack on some compus kid’s hairy ankle.  And think of our Hawaiian friend, right there in the middle of the crosswalk, she simply hits the CROSSWALK button and… BOOM….the crosswalk pipes come up outta the ground and rip that guy’s back bumper right off as he speeds past.

And the best part would be when he goes to try and claim it on his insurance….”Well, how did this happen?  Were you doing anything illegally when the damage occurred?” … his response.. “Well, um…um… nevermind!”

Here’s what we are going to propose for Pennsylvania and Hawaii legsitatures…. make it a rule that, when there IS a car blocking a crosswalk, it’s okey-dokey if the people crossing, open up the side door, slide through, open up the other side door and cross safely to the opposite corner.  Imagine all of those kids in the pic above sliding through that guy’s back seat!  And when they go thru, they are all permitted to give him a sloppy WET WILLY!!!  He’d have to sit through 4 lights!!!

(her blog is here http://www.nonstophonolulu.com/category/blogs/urbanmixplate/)

And special, SPECIAL thanks to the Jagoffs at WordPress who still can’t tell us how to fix the linking problem they caused!