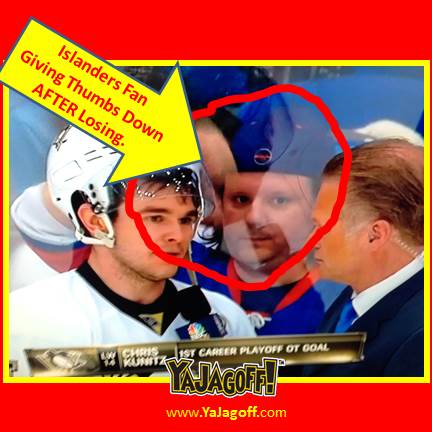 This is totally a HOMER post and we know it!

On Sunday, the Penguins played the New York Islanders.  The game was rough to watch given that our beloved Pens were, well….not playing their best for part of the …well.. MOST of the game!  But the bottom line is, Chris Kunitz scored in the overtime period and the Pens took the game.

During the TV interview with the game-winning scorer, this dude gets behind the shot and starts video-bombing.  It’s hard to tell from the still photo but, he’s making faces and continuously doing the “thumbs down” move with his right hand.  Seriously? We just won the game you DINK!  What part of the overtime did you miss?

Now don’t get me wrong, I believe photo-bombing and video-bombing  should be Olympic events. But.. there has to be SOME common sense to their execution other wise, well… you end up like this guy!

Hey Tom-Thumb-The-Islander fan, your national TV debut couldn’t have been any less original if you would have lipped, “Hi Mom” or used half of your finger to fake like you were picking your nose.  And, quite honestly, we probably would have let that go because you look naive… even for an Islanders fan who, pardon me for bringing it up, who’s team is  not even going to be on Long Island very shorty.

But standing behind the game-winning-goal-scorer performing some stupid thumbs-down motion?  Save it for the rest of the Isles fans that think on your level… like the 8-year olds that do Thumbs-Down motions while picking their BUTTS with the other hand, Ya Jagoff!