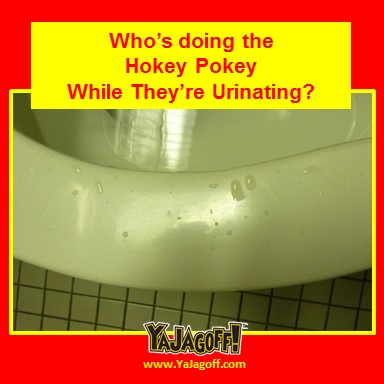 We’ve all seen it.  There’s pee on the house toilet but nobody admits to it knowing how it got there.  Sometimes the pee trickles down the side of the toilet and, after a day or two, bonds with the floor dust to create a nice patch of yellowish fuzz near the bolts that hold the toilet to the floor but, nobody admits to putting it there.

Are ya gaggin yet?  (Know that I gagged writing this.)

Somehow this odd phenomenon occurs but, the phenomenon of someone in your house taking responsibility  and cleaning up after themselves seems to be missing.  Which, by the way “missing” seems to be the overall issue here doesn’t it?

Now, if there’s a grandpap in your house, the picture above may acceptable and all bets are off.

But back to the situation at hand.  Consider this an open letter to whomever in my house is having a tough time with aim.  Currently, it looks like someone is doing the Hokey Pokey while they’re peeing because of  all the pee trickles all over the floor, wall and toilet.