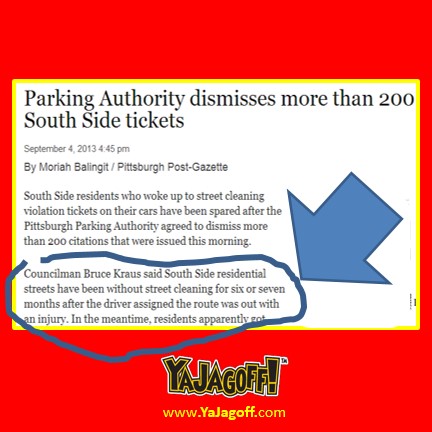 Does anyone see the I mean the irony here?  Urine and spilled beer have been piling up in the South Side for 6-7 months.  The South Side.. where garbage piles up faster than dirty laundry in a college freshman’s dorm!  And not one person complained UNTIL they got an inappropriate parking ticket.

But wait!!!  The reason that the streets haven’t been cleaned is because THE…yes, THE…. as in one….not two.. ONE.. THE “driver assigned to the route was out with an injury.”  Does this not make ya nuts that there is one street sweeping person responsible for the  South Side. And the poor person is injured and nobody can cover for him/her?  Nobody else knows the South Side streets?

One question.. have you ever gone on vacation for a week and, when you get back, you regret ever leaving because all of the work has piled up while you were gone?  Imagine THIS person coming back to work.

Doesn’t EVERYONE in the world have a back-up!

Everyone has a back-up except for, of course, the person that hasn’t been able to run the Street Cleaning Curb-pee-scrubbing  machine around the South Side.  And we are not sure why.. we don’t believe there was a salary cap issue when they brought on a line-painting rookie out of Fresno State!

Soooooooooooooo can some of you City bosses paaaleeeeeeeeeeeeeeeeze appoint a Co-vice-Assistant-Substitute-Second-String-South-Side-Street-Cleaner-Person, Ya JagoffS!