Here’s the deal, we don’t care what side of the political fence you’re on at any level.  But something about political advertising seems to lower SOME PEOPLE’S threshold of good taste, between factions, faster than Charlie Sheen invading a Pampered Chef party.

Out in the west-suburbia area, Robinson Township, we find our first example of poltical-pettiness of the season.

It all seems pretty civil until you realize that the people who posted the red-and-black sign have a HUUUUUUUUUUGE yard and could have put their sign in ANY three-square-foot part of their yard.  INSTEAD, they chose to place THEIR sign in a place that blocked the black-and-gold sign from being seen by those driving by. 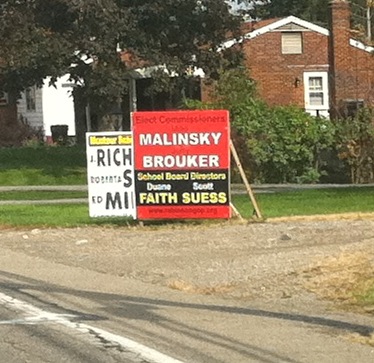 What an AWESOME display of civility and professionallism for the young ones, huh?  (You know, the kids we are teaching about BULLYING being bad?)  Is THIS what local politics has become?

My sign’s bigger than YOUR sign!  Naaaaaa, naaaaa, na, naaaa naaaaa! Besides, your candidate is nothing but a “Poopy Pants!” (followed by a spitting of some raspberries toward the competition’s signs and then spraying them with that imaginary “cootie spray” we used to use in 1st grade!)

Well we don’t doubt that the team of Faith and Suess might have an edge here because it’s clear that they relate REALLY well with the kids of the school district – TOO BAD ITS THE KINDERGARTEN’ers!!!

To some politicians, we can’t wait until Election Day is over so we can go back to watching some high-integrity TV commercials, like those from the local car dealers  – the ones where they ride donkeys, pop balloons, scream and stomp like crazed maniacs as they display their lack of self-pride just to hock some cars.  In the meantime, to these political-marketing-geniuses in Robinson Township, don’t forget to knock the books outta your opponents’ hands and give them a wet-willy when you see them in the school hallways, Ya Jagoffs!

Credit WPXI for this story.

Don’t forget it’s still Breast Cancer Awareness Month.  Men AND Women, be sure to check your humps for lumps!