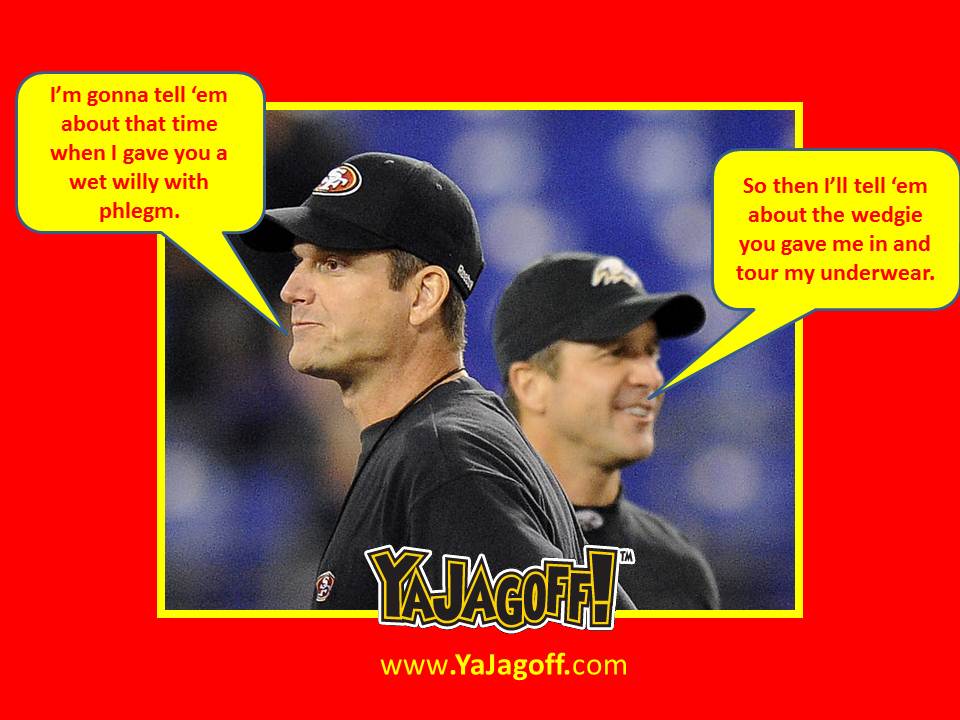 Ok… from the START we realize this is a “sour grapes” blog post.  But……whaddaya gonna do!

Yesterday’s Patriots vs. Ravens game had Steelers fans perplexed… who do we NOT root for????????????????  Well, turns out that the Ravens won and now we have John Harbaugh coaching against his brother Jim Harbaugh in the upcoming Super Bowl XLVII. For those of you that are Roman-numeral-challenged, that’s 47.

And the madness has already started… the NBC analysts started it with the “Two brothers on opposite sidelines” as the Ravens game went off the air.  GAWD… leave it to the sports analysts for BRILLIANT cliche-creation!!!!!!!!!!

Between the Ray Ray talk and the brothers, I’ll watch American Idol……

So, yep, we’re ticked that the Steelers didn’t even get to SNIFF the playoffs this year, but this post really isn’t about the Ravens, the 49ers OR the Harbaughs.  It’s about the cheap-media coverage to which we will all be subjected for the next 2 weeks as we all are googling new Super Bowl snacks for the upcoming TV-commercial-watching parties being scheduled for the evening of February 3rd.

So, I guess we’re part of the problem by talking about this but this is our plea to all of the media covering the Super Bowl, could ya paaaaaaaaaaaaaaaaleeeeeeeeeeeeeeeeeeze stay away from interviewing the Harbaugh Brothers about growing up, no we don’t want to see their bunk beds from when they were kids?  And no, we don’t care when, more than likely, the two of them bullied kids in elementary school to get lunch money and, as you may be able to guess, it won’t be worth it to interview Mr. and Mrs. Harbaugh senior and ask them WHO will they be rooting for??????    They’re only gonna say, “we love them both!”  It’s all SAPPY and predictable.

But feel FREE to re-run the 3,018 stories that were done on Jerome Bettis the year he “went back home to Detroit” for the Super Bowl.  From a sour-graped Pittsburgh point of view, THOSE were not sappy.. those were art.

OK.. have at it with your HarBOWL word play, we’re tuning into American Idol and Petticot Junction reruns with our friend Michael Monday, Ya Jagoffs!!!!