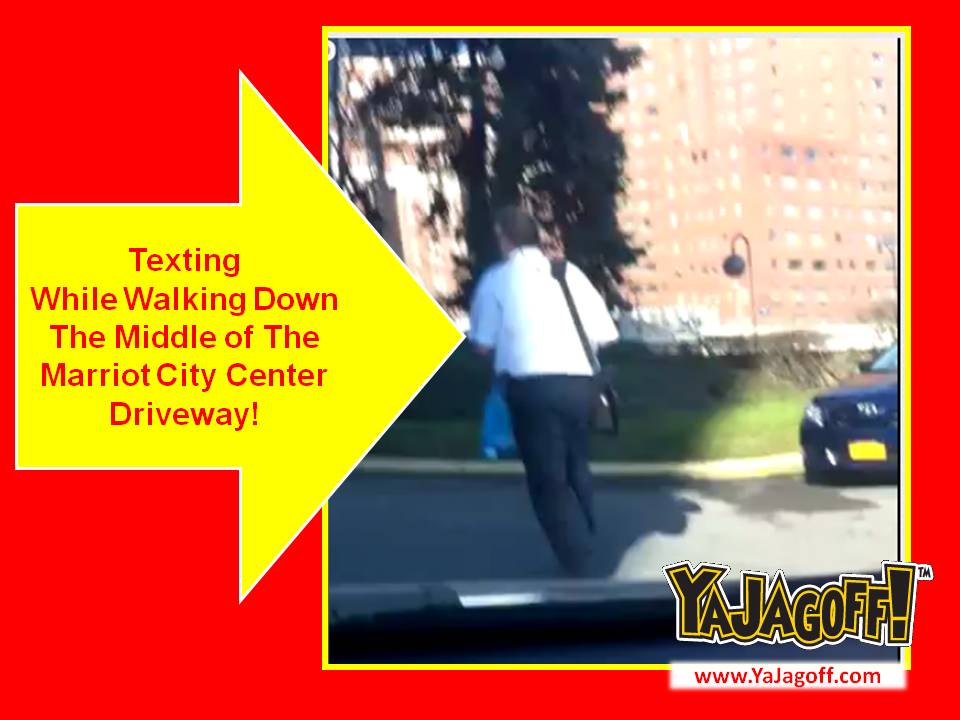 OK, this story is gonna be just like the “big fish that got away,” the story that the Pirates REALLY ARE going to be better this year and that story where the B-52 Bomber supposedly crashed into Mon River near the Point in 1956… we basically have NO EVIDENCE! (except for this one still frame we pulled from the iPhone video.  It’s kind of like our version of the Zapruder film…the ZaJagoff film.)

So we’re in downtown Pittsburgh doing a meet-up for some Ya Jagoff! paraphernalia.  We pull into the drive way of the Marriott City Center, near the remnants of the ol’ Civic Arena.  As we pull in, there’s this guy (pictured above) walking in the sunshine, reading his smart phone, sauntering….with no regard to the rest of the world… right down the middle of the hotel driveway.

We’re driving behind him considering beeping to get a reaction out of him.  But we don’t we wanted to see, ON VIDEO, how long it would take for him to realize there was a 2,500lb vehicle lurking dangerously behind him.  Finally, the guy looks up.  Looks at our car then looks right back down at his phone and KEEPS WALKING!  Never an “I’m sorry!” nor one of those blank “I don’t know any better I’m from Cleveland” looks…. NOTHING!!!!

Soooooooooooooooooooo we say to ourselves, this is classic!! Can’t wait to get back to the WJGF news desk and get this edited.

When we get back, well, this is where WE become the… well, ya know…… cuz as it turns out, we had not hit the RECORD when we thought we did.  We only hit RECORD for the iPhone video as we were putting the phone back down on the car seat. (The resultant video was the camera lens quickly passing our EZ Pass unit, our dashboard and then total blackness as the phone was placed, lens down, on the front seat of the car!!!  Almost 7 minutes of a black car seat and us singing!!!!!!!!!!!!!!!!)