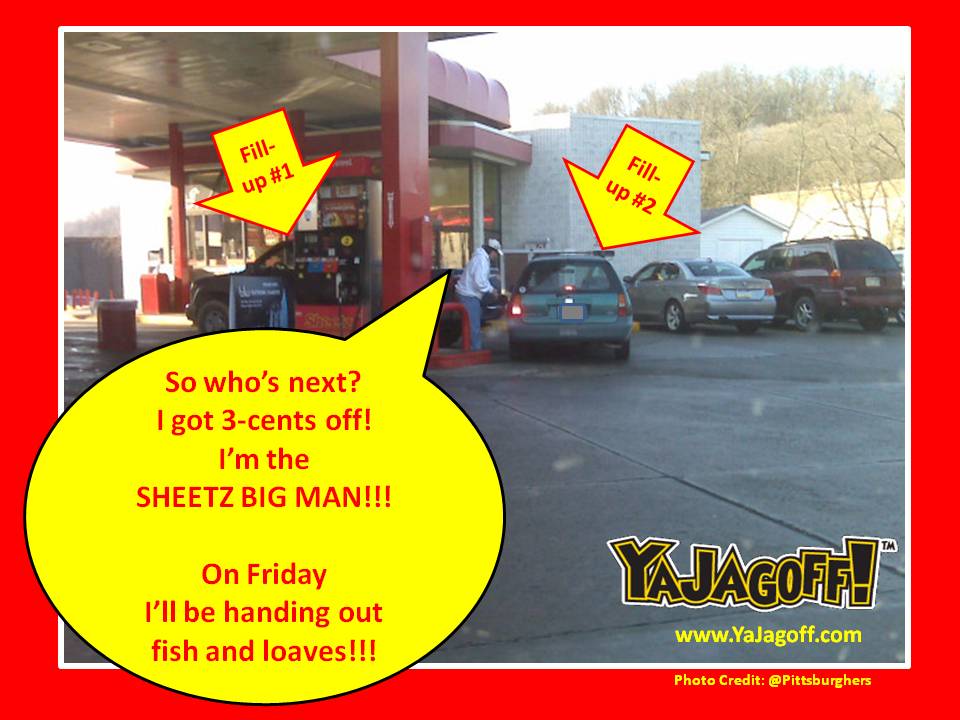 This is at the Sheetz on 286 in Plum (next to Stanford).
And what you are seeing is the “grown-up” version of the kid that used to take 4 cupcakes all at once when someone brought in birthday treats to your kindergarten class.  It was because of HIM that, at the next party, everyone had to stand in line single file and be HANDED 1 cupcake each.. leaving you with an angel food cupcake when you REALLY wanted a chocolate one!!!!!

Here’s the write-up that was submitted with this pic:

Sheetz has cards like the GetGo advantage card, but you don’t build up extra savings, you just automatically save 3-cents per gallon for using your Sheetz card.  At GetGo you get one fill up with your perks (maybe 40-cents or a $1 off per gallon). But double dipping at Sheetz for 3-cents off makes no sense (or cents) at all!

He’s right.. it makes NO sense to call the wife and say, “Honey, rush on down here, I have 3 cents off per gallon…it’s OUR night to cash in!!”  So all this guy’s doing is spoiling the party for everyone else over 3-cents a gallon.  Next week, there will be signs up, “ONE CAR PER FILL-UP!”

But wait!  We like to give some people the benefit of a good excuse.  Maybe he’s SHARING with everyone.. maybe he’s the SHEETZ GAS SANTA!!!!  “Come one, come all!!!  I’m handing out 3-cents of gas!!!! I’m SHANTA!” (Did you like how we did that overused “SH” Sheetz thing on Santa??)

Hey SHeister, SHeriously…(yep we love overusing the gimmick too) you were probably the reason that your first grade classmates had to bring in their own #2 pencils– cuz you kept taking handfuls from the teachers’ “Free” box and, more than likely, you were the kid that got caught eating mouthfuls of communion hosts after 2nd grade First Communion practice and we GUARANTEE your the guy that tries to purchase a large bag of Doritos, 2 MTO Shnack Wrapz and a 4.5 liter fountain drink with a dollar bill and all of the change in the “take a penny” holder.  In the meantime, youre holding up the gas line longer than one of those landscaper trailers that fill 38 2-gallon gas cans every summer morning,  Ya Jagoff!!!

Thanks to Twitter follower @Pittsburghers  for being today’s Honorary Jagoff Catcher!  who is He also writes the Yinzer Blog and  runs eSellout.com . (eSellout.com is the best place in the world to get tickets to ANYTHING)

Only 14 more days in the Pittsburgh Magazine poll.

Gun Goes Off at Giant Eagle. What’s the REAL Crime?

This excerpt from Mike Hasche at the Trib (WPXI News Partner) kind of says it all: Two people suffered superficial wounds from what appeared... 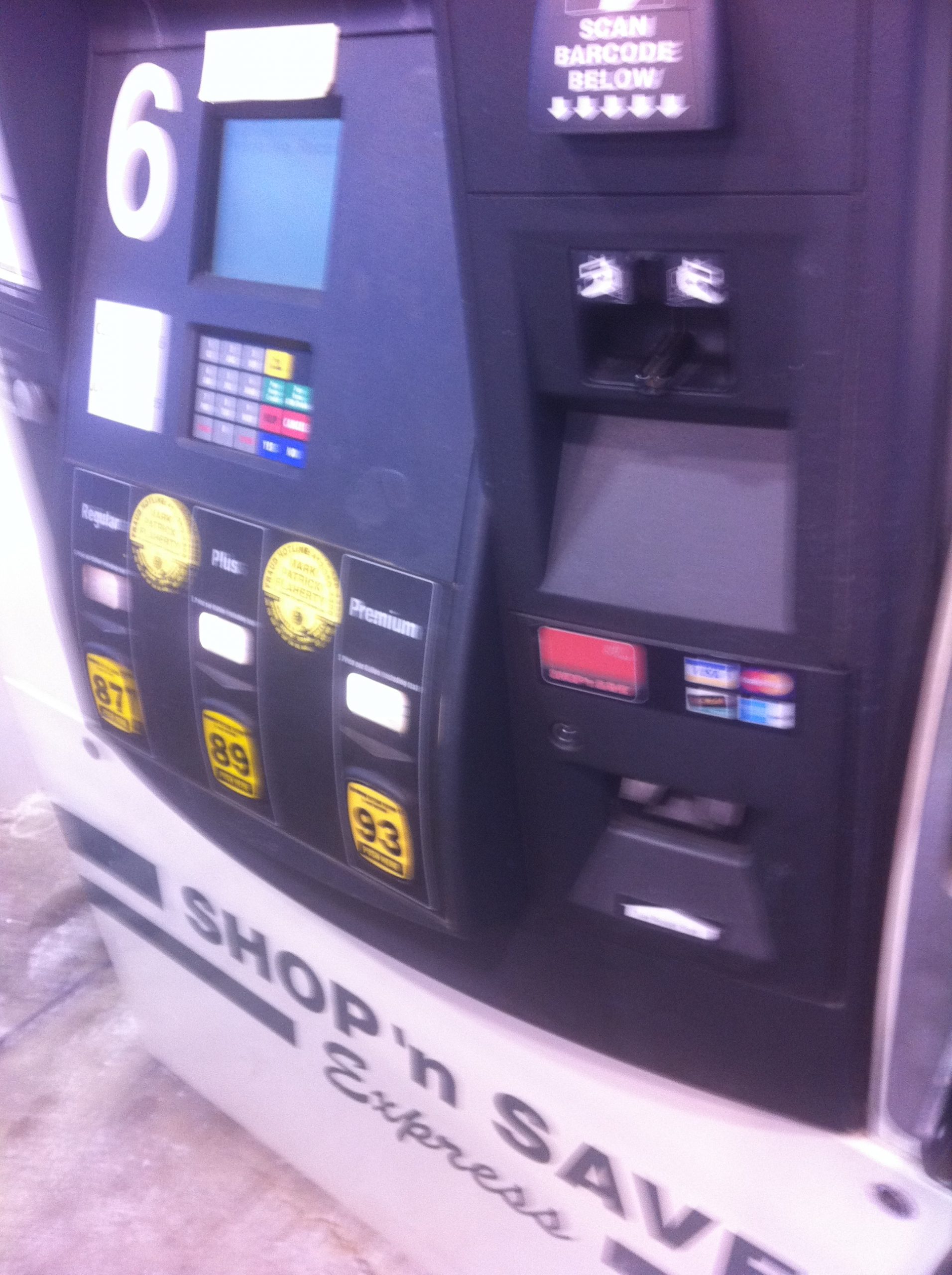 Self Serve Gas AIN’T As Simple as Just Gettin’ Gas

This is a repost from last year BUT has real meaning cuz these gas pump questions are getting RIDICULOUS!!! When I’m getting gas, I’m... 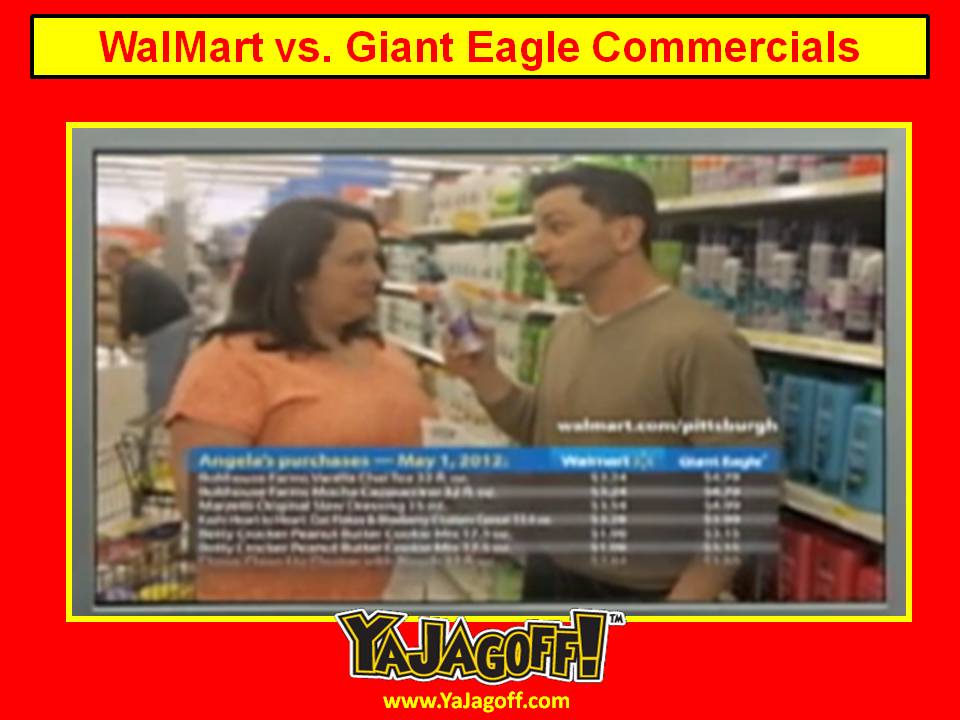 OK.. it has taken us a while to pull the trigger on this one.   Watch the video. (No seriously, watch the video… you may...