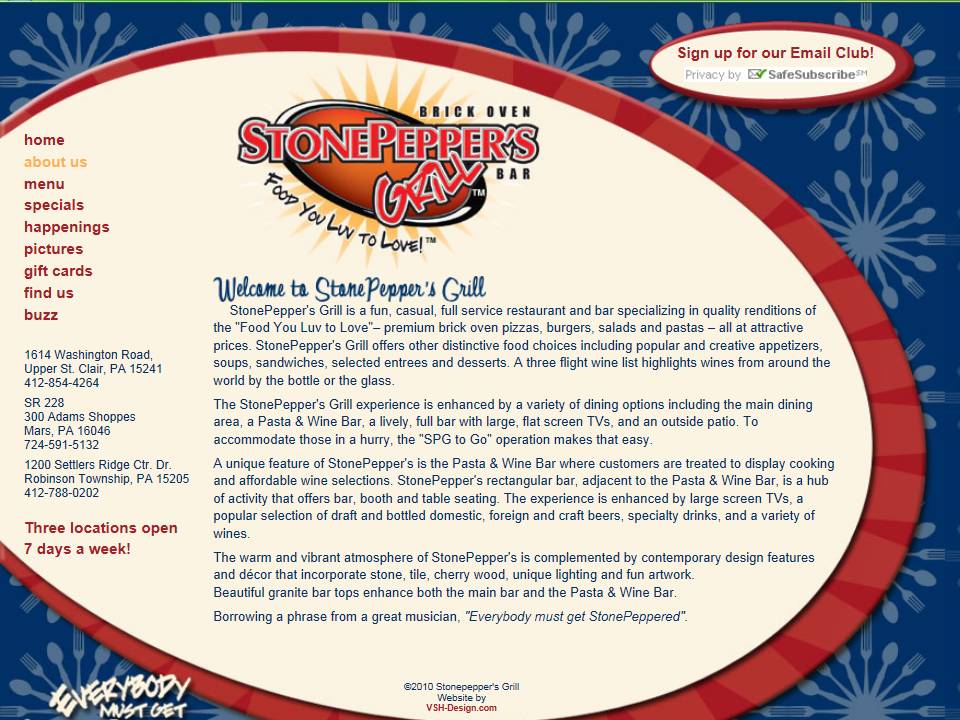 To be clear, we are not hear to be food critics or make scud-like attacks on Pittsburgh things or people.  On the other hand, when people really do act like… well, YOU KNOW, then, we have to let folks know because we LOVE Pittsburgh and we hate when people make the rest of us look bad.

We received an email (sender remaining anonymous for good reason) about a recent dining experience at the Settler’s Ridge restaurant called, StonePepper Grill.  Their motto is, “Everybody Must Get StonePeppered!”  We will not say when the visit was, other than it was approximately September, 26th around 7pm or so.  And we will NOT mention the manager’s name (who is the subject of this post) so let’s call him EVAD (quite possibly the reverse of what was on his name tag).

Here’s a piece of the email we received: (we have inserted filters for the swear words)

The manager there is the most unprofessional, slovenly, rude and inappropriate piece of (things that flies hover around)  I’ve ever had the displeasure of seeing. His stained t-shirt is probably NOT the dress code. I watched him grab an 18 year old employee’s (substitute another word for DONKEY). I heard him say he was going to “punch the cook in the mother-(think of a word that USUALLY comes out when a little boy tries to say the word TRUCKING) face.”

The email goes on to talk about the manager, who we don’t want to name (but apparently has red-ish hair and and should probably eat a few more redishes and less bread and fries) on how he taunted this particular customer about her wanting to take him home!

To be fair, back in July, there was a pretty favorable write-up about the StonePepper Grill in Robinson raving about the food and the restaurant itself (click here).

On the other hand, when ya have a guy like Dave, oops, I mean EVAD running the shop, ya gotta wonder how long it’s going to be before the restaurant becomes the next “Store It Yourself” warehouse!

You may think that we want you to boycott the StonePepper Grill at Settler’s Ridge, but NAY, NAY!  We suggest something completely different….if you get a chance, go there.  Call ahead to see if our man EVAD is working.  Then, work your way into a situation where you have to talk to the manager (him).  At that point, let’s see if we can get him so fired up that he CRACKS in front of everyone!!!  (Feel free to mention that his shirt is stained more than Fred Flintstones!)

In the meantime, to the StonePepper gang, ya might be better off with Stone Cold Steve Austin as opposed to “EVAD THE GOLIATH” as a manager for your place in Robinson.  It actually might be GREAT for business if you print EVAD some business cards with HIS name on them and the name of one of your competitor restaurants!!!

And EVAD, we’re thinking that you should have spent the extra money to go to the Disney Customer Training as opposed to the Lucky’s Bar and Radiator Shop class you probably took, Ya Jagoff!!

NOTE:  While this Jagoff tip was anonymous, we had more than enough detail from various emails to assure that this is not some secret scud attack!  Go see EVAD yourself and let us know!  The first person to email us a photo of themselves WITH EVAD and you in your “Don’t Be A Jagoff” t-shirt, will get a $25 iTunes Gift Card! (YaJagoff@comcast.net)  And remember to be nice about it!!!  Don’t become a jagoff yourself!

In this article: Stone