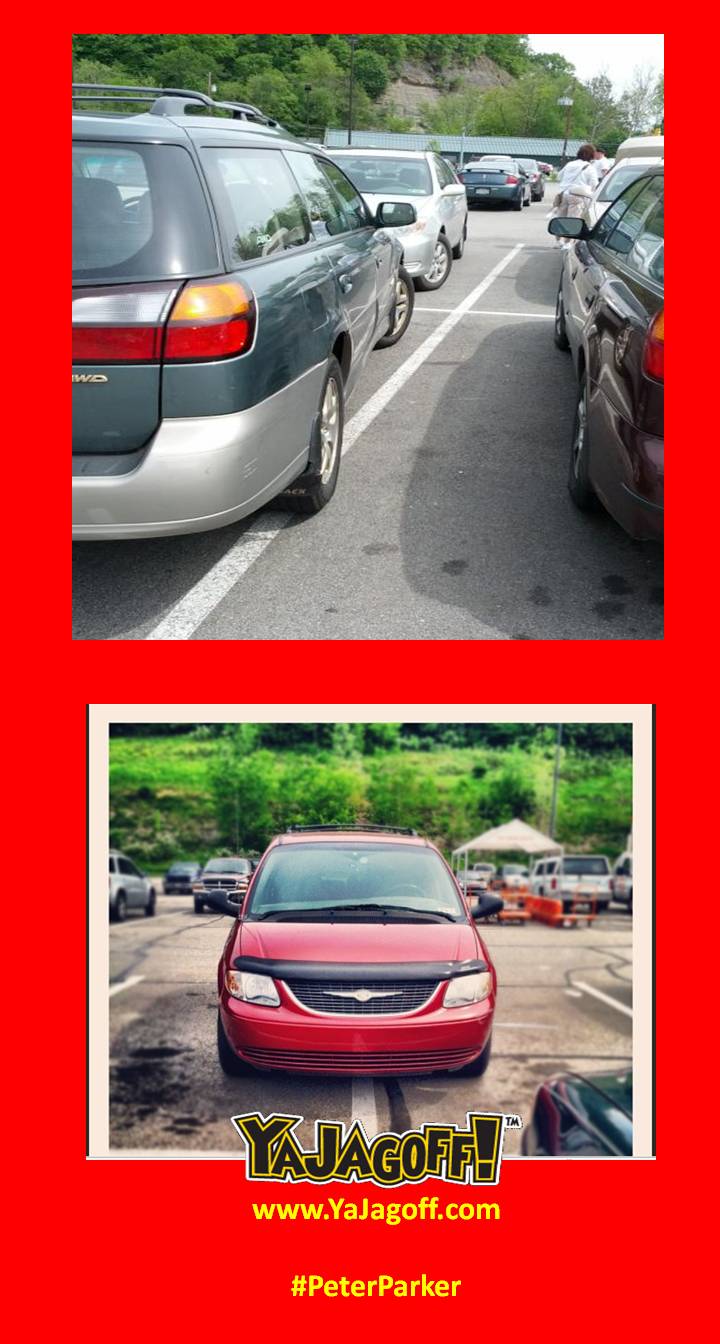 What are Peter Parkers?  Well, there’s a nickname for “Richard” that one might use to describe how these people park BUT “Peter” seems like a better word since, this is a family show, AND it flows better ….with Parker so you get, “Peter Parker.”

Now these most recent pics (above) REALLY confuse us.  In the pics above, you’re looking at a mini-van and a Subaru that have no concept of those things called “white lines” in the parking lot.  As a matter of fact, it looks like the mini-van thought it was the “centering point” for parking. (Maybe the driver’s an airpline pilot??)

But the confusing part is, we thought people and mini-vans were sweet, responsible soccer moms and people that drove Subaru’s were “earthy” respecting the planet and all those on it???????  Well, so much for stereotyping!!!!

It’s kinda like those people that go to church for an hour on Sunday…. they’re all nice, holy and caring, UNTIL AFTER CHURCH when their battling for that closest parking spot at Eat ‘n Park!!!  They become raving maniacs at that point!!!

Are these drivers possibly playing the 1/2 priced version of Four-Square called “2-square” and trying to be Mayor in one parking job????

Whatever it is, here’s what we suggest to our followers that find Peter Parkers.

1) Do not get violent

2) Put some kind of note on the car telling the driver that they are about to be famous on some website called, YaJagoff.com.

3)  Take the rest of the day off and hang with a relaxing icy drink on a bench somewhere  within the sight line of the Peter Parked car.  When the Peter Parkers return to their car, photograph their reaction to your note, then, to get out your aggression, use your  THUMB AND POINTING FINGER IN A PINCHING MOTION, to pretend that you are squishing the Peter Parker’s heads.  If you’re REALLY mad, squish their head over and over from many angles, like you were back in the 4th grade and mumble to yourself in a sinister way.

God! It’s better than a stress ball or Tai Chi.

In the meantime, we think we need to go back to the REAL problem of teaching these people how to park.  We say, hire some of those guys that manage those North Side parking lots during Steelers games to work THESE lots during the week.  You know, those guys that charge $45 CASH for every spot you take!

We guarantee that will teach ya how to park in ONLY one spot because, at THAT rate, even a hockey mom who’s only parking skills include pulling into the curb when dropping off junior at the front door of the rink to unload, figures out how to squeeze a vehicle the size of a Ducky Tour Boat  into a spot the size of a Smart Car, Ya Jagoffs!