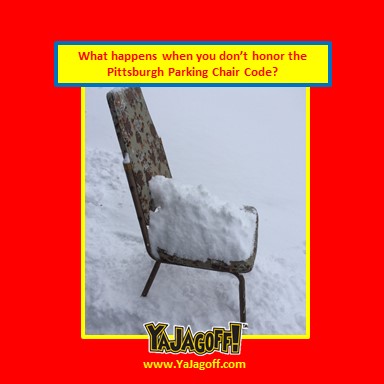 It was the first weekend of January 1994 and I was near the end of my holiday visit. We had been living in Los Angeles for a few years, but for some odd reason the big snows always seemed to wait for my arrival back to Pittsburgh. My wife and I were staying with my parents at the home where I had grown up. It was on Race Street in McKees Rocks, a one way street with cars parked on both sides. This usually left just enough space to squeeze your car through and if you were driving a truck or SUV you would bless yourself before trying to navigate the narrow lane.

On Sunday January 4, the snow kept coming down. It had started the night before and by the time it was over I think there were 18 inches on the ground. I had been battling a stomach virus all day and was just starting to feel a little better when the snow finally let up, sometime in the early evening. I think it was around seven when I heard the first shovels going to work outside and knew that I should join them. All of the neighbors were out and we bitched together about what had been dumped on us. Well, not all of the neighbors were present. There was a family up the street that nobody really cared for because, well because they were jagoffs. This family would just wait for warmer weather and everybody else would just have to find a way around the foot and a half of snow on their sidewalk.

The snow was heavy and a bitch to shovel. It took me almost four hours to get it all done. The sidewalk was the easy part. I could just shovel it right into the yard. The two cars are what took most of the night. I had to fill up a shovel and then walk about ten feet to the yard before dumping. Anyone that ever had to dig a car out of the snow knows that you also have to clear a path in the front and back of the vehicle so you are able to maneuver out of the space. As cold as it was that night, I worked up a good sweat and was exhausted as I entered the house.

My father had to work the next day and as he drove away I practiced the Pittsburgh tradition of placing a chair in the space I had dug out. The chair is just a formality to let everyone know that you worked hard to clear this spot and have earned the right to park there. Nobody would ever bother another’s hard earned space. At least that it was you would think. It was around four in the afternoon when I glanced out and was shocked at what I saw. The parking chair was sitting up on the sidewalk and another car was occupying the space. Not just any car, the car belonging to the jagoff family. “Son Of a Bitch!”
I looked to see that they had knocked the snow off of their car, adding more to the wall already on their sidewalk, and somehow managed to wiggle the car out. There was no way to get back into that space so they stole ours. I was so furious that I couldn’t think straight for a few moments.

When I finally calmed down the solution was clear. I bundled myself up, went outside and proceeded to put all of the snow back where it was .I piled In front of the car, behind the car, beside the car and of course on top of it. It took an hour and a half but this time it was more fun than digging out the space. When I was done you wouldn’t have even known there was a car buried under all of that snow. That’s when I got the hose. You like that space, you can have it until April.

Post a comment below before Midnight (EST) and be eligible to win a signed copy of John’s book.

Go to John’s website by clicking on his book cover below.