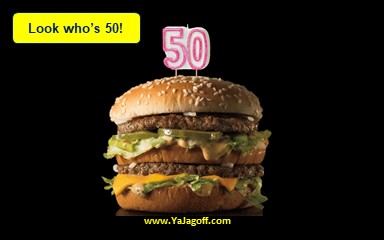 Tomorrow we pay homage to burger royalty.  We proudly celebrate that the double beef splendor known as the Big Mac will turn 50! We will not be hearing happy anniversary Aristocrat, or rah rah Blue Ribbon Burger!  That is because the third time has proven to be the charm in the case of naming the mac daddy of all burgers. The first two names just did not do it for the burger of choice in America!

Can we imagine crowning Ms. Pattie with any other title?  Rolling out the red carpet for buns with anything else in the middle? Letting any other ‘burgher taste the limelight? No way.

How would we join in the food favorite jingle “two all-beef patties, special sauce, lettuce, cheese, pickles, onions — on a sesame seed bun” and have it reference another menu favorite? Impossible!

Instead, Pittsburghers proudly salute the ‘meat’ to any McDonald’s meal, the main feature, the it burger, the Big Mac.  Afterall, it has a museum in its honor, is supported with fries and has been ordered thousands of times.  It has cheered people up and satisfied hunger pains.  It has double the taste and warrants its own specialty sauce.  It requires a custom box instead of simple paper and must be accompanied by a napkin to absorb its greatness.

It is the Big Mac, plain and simple.  No other name would suffice. It deserves a celebration and it will be the meat of any news story.  Primantis, you have earned a spot in sandwich stardom, you too, whopper.  But just a warning, tomorrow is #BigMacDay, so don’t be a jagoff and try to beef up your game.  Afterall, the Big Mac is the mac daddy to meat.