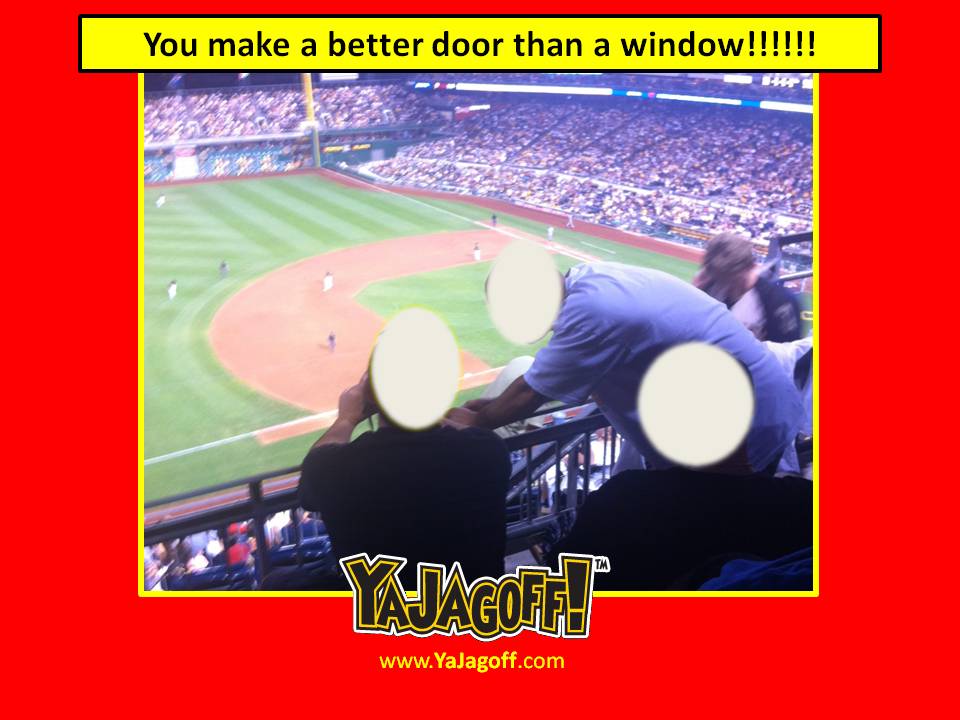 We have had a few Pirates Fan Jags pics sent to us for obstructing people’s view of the game.  But some people just can’t help the size of the head that God gave them.   And we have yet to receive a jagoff  post request about someone  who stands up with one of those “Hey look at me mom!” signs and blocks the 5 people behind them from their own “Hey maybe a talent agent will spot me on local TV” moments.

But THIS one really counts. We knew when we purchased the tickets that they were discounted for “obstructed view.”

What we DIDN’T know was that, on this night, obstructed view also meant “drunk guys will continuously stand up and hug,  chat about world politics, and check out every 47 photos per minute of the City skyline taken by friend with brandy-dandee-new camera.” (Hey!  Look at this one!)

For MOST of the time, the official year-book photographer dude with the new camera, sat down humbly each time we politely asked him to sit down when he  lost track of his GBPS (Global Body Positioning System).

But Obstructionist-Ollie just didn’t care about anyone, but himself, having a good time.   Guessing that Big Swingin’ Meat, like him, is used to sitting and moving around in his own private box for most games.

Make no mistake, the pic above is NOT a one-time pic. All during the game, he would stand up, stretch, look around, talk to the gang, hug them frequently and cross over rows of chairs to talk to even MORE people. BTW the hugging became more frequent as the alcohol increased HOWEVER we never saw him noogie anyone’s head or grab them by the back of the neck, get 2″ from their face and tell them he loves them.

Big guy, the Buccos lost that night so there wasn’t really much hitting to see.

And the night we were there wasn’t Skyblast but, despite the fact that it would be literally impossible for anyone to obstruct our view of fireworks on a Skyblast night as we all looked skyward,  we guarantee YOU, Obstructionist-Ollie, would have found a way.

As our grand pap used to say, “Ya make a better door than a window!”   If you get tickets for any more Pirates games, we suggest row ZZ….the very last row of PNC Park, so that they only thing behind you is concrete, Ya Jagoff!!