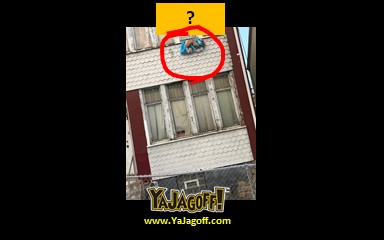 Today is a day for John to get his mani/pedi for the 100th Podcast Episode Party on February 1st.

Tis the season.  Christmas is over and before Valentine’s Day and Easter sweets are touted on laminated order sheets, it’s the ‘knock knock’ want some cookies season?  Yep, Girl Scout cookie sales peeps are asking the dreaded question of how many boxes? But that is not happening at this uninviting house.

I am certain that somewhere there is an “off limits house” guide given to the Girl Scout entrepreneurs and this gem is the example of where not to visit.  After all, there are three major clichés happening here that Girl Scouts know to avoid:

Don’t air your dirty laundry, or in this case your multi-colored plastic bags of stuff that hangs out of your second-story window.

One person’s garbage is another person’s treasure, except when it is in the form of various plastic bags that discolor and distort the bags due to the garbage that is inside…hanging out of a second-story window.

When the snow melts, the findings we find, in this case the findings could be any left over debris or garbage from the holidays stuffed into colored bags.  Apparently these bags are then mistaken for décor hanging out of a second-story window.

Side note, maybe just maybe the bags were hoisted from the window, never making their way to the outside for garbage pick-up, and then were mistaken as decorations until the snow cleared, inadvertently scaring away any Girl Scouts.

Well, for whatever the reason the ugly bags hang out of the second-story window, the house is not inviting, even when the bags are gone.  After all Girl Scouts, you may be cookie selling entrepreneurs, but the sign says No Trespassing ya jagoffs!