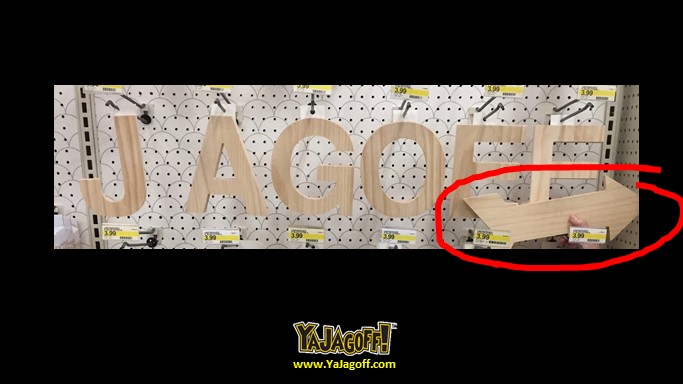 See?  So many peeps becoming creative.  This one, as pointed out by the Jagoff-astrator has a makeshift Kennywood arrow.  Here’s the note that came with it.

I grew up in Pittsburgh, but have lived in Ohio for over 30 years. I taught my son the word “jagoff” was he was a teenager. He loves it! So, when I told him about your challenge, he was all in.

We were at Target and the Jagoffs were out of the F!!

I had to get creative with the arrow.

The boy may have been born in the wrong state but his blood runs true Pittsburgh!

So, just in case you missed it…they tried this at a different store.. that store didn’t have any F’s. When adversity faced them, did they abandon the mission? Nope!  Moved on to another store!  Haaa….( a little bit of pee trickle because of excitement on this).

Way to go! Glad to see the Jagoff Catcher Training is as intense as a 4th-down-1-yard-to-go-and-I’m-gonna-blitz-your-arse stare from Troy Polamalu!

Keep getting creative… YaJagoffs (expressed in the term of endearment form!!)

Thanks to Jan Mason and son for being today’s Honorary Jagoff Catcher.