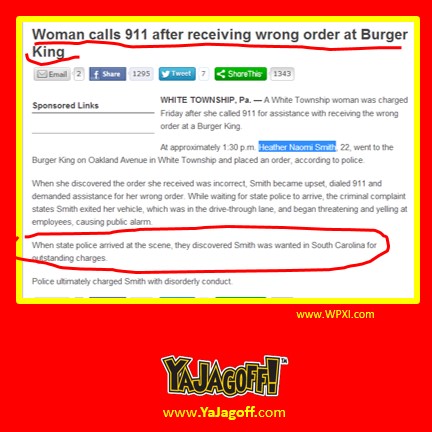 So the graphic pretty much tells the story.

Police realize she has a record out of state (are we shocked?)

The way I see it, the most serious part of the case wasn’t reported…we don’t know what happened to the order!  Did they eventually get it right?  Who got to eat it after all of that?  Would the meal be free if I drove up there and tried to claim it saying I was Heather’s hubby?

Even more, were there really no secondary crimes from the ticked off the people stuck in line behind this craziness? (And you know how mad you get one the line doesn’t move fast enough….”What are those people doing, getting a frickin’ mortgage?”)

Heather: Yes hello! I need the police right away!

Dispatcher: Okay calm down Mam. What seems to be the problem?

Heather: Well I’m at Burger King and I just placed my order for a Whopper Jr! and fries! Then when I got my order I realized they had given me a full sized Whopper!

Dispatcher: Wait….. Is this your emergency?

Heather: Well obviously! I have a figure to maintain! I can’t be eating a full sized Whopper!

Heather: Thank God! Tell them I’ll be the one standing in the drive thru!

Dispatcher: I’m sure they’ll figure it out…..

Heather… not saying that you probably weren’t at the head of your class in Common Sense 101 but….

I mean, wanted by the police… then calling them to ask for help… WITH A FAST FOOD ORDER?  That makes as much sense as asking Colonel Sanders to see if he could come over and babysit your pet chickens!

Might I make a small suggestion?  May I suggest a T.V. dinner for your next feast?  It’s no Get Out of Jail Free card but, if ya buy it at Giant Eagle, you can get fuel points on a Giant Eagle card!  Just don’t call the cops if your corn spills into your hot lava brownie, Ya Jagoff!