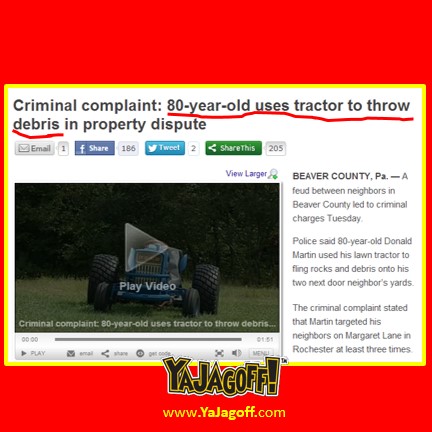 80-year-old Donald Martin had a property line dispute with his neighbors in Rochester, PA (Beaver County). So he did what ANY neighbor would have done to rectify the problem…he hopped on his tractor and used it to sling large rocks and tree limbs at his neighbors!! Who needs a magistrate anyway?

Has he not heard of the phrase, “Let he who cast the first stone… be posted on Ya Jagoff.com?”

At some point, the Rochester police were called and Spunky Don ends up with criminal complaints against him for doing this THREE TIMES.

According to the WPXI story, the police almost had to use a stun gun on Spunky Don. WHAT IN THEEEEEE HELL WAS IN HIS RAISIN BRAN????

Thank goodness someone had some sense and got the police involved before this ended up as something out of a Looney Tunes:

The neighbor comes out of his house with a cup of coffee, an errant rock knocks the cup out of his hand, he falls sideways, knocking a bucket of water  off of a window ledge, dumping the water on to some outside Christmas lights, thusly causing an electrical short that causes one of the street’s transformers to explode on a telephone pole, which scares ANOTHER neighbor’s cat who SCREECHES and JUMPS and freaks out Mr. Locke’s dog (if he has one), who then tries to CHASE the cat and pulls on Mr. Locke’s arm soooooo hard that his arm pulls out of its socket, thusly causing Mr. Locke to CRAP his pants from the pain which, in turn, causes Mr. Locke’s dog to CRAP in the yard just over the disputed property line and GUESS WHAT???? Mr. Locke has NO Pooper Scooper baggie with him to clean up the doo-doo and the situation finally culminates at the point that made Spunky Don sooooooo mad in the first place. (Now who HASN’T been that mad at a neighbor that doesn’t clean up after their dog?)

Ok..tht’s a lie too but its mildly more entertaining and just as immature as what REALLY happened.

Hey Spunky Don, we have one SIMPLE question for you. This has been going on since June! Do ya think you might have cut all of this nonsense off-at-the-pass by using the tractor to drive over to Mr. Locke’s house with an apple pie (even if it was store bought), giving Mr. Locke a friendly little tap on the shoulder and asked him to bring out some al a mode ice cream then sit down and chat this up, Ya Jagoff??