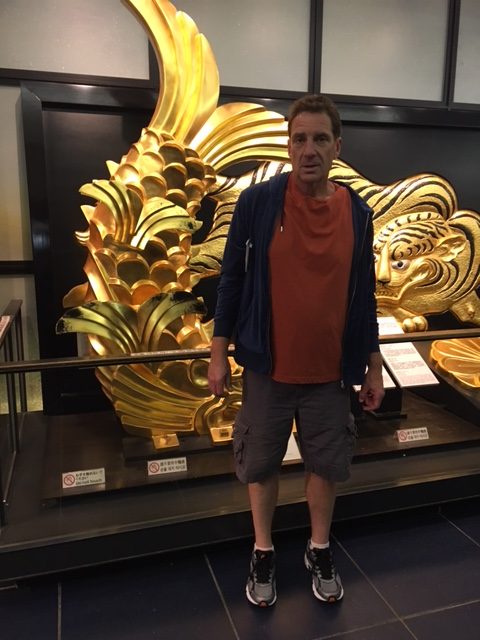 Always listen to your wife. If you’re a married man, I know it’s a hard thing to do. It’s just that being a man, we like to feel that we’re always right.

I was packing to leave for Tokyo to pick up a cruise ship I’m performing on. I would be joining on day twenty of an 81 day cruise. Do you know what kind of people are able to take an 81 day cruise? Let me just say it’s the first ship I’ve been on that has a funeral home.

“Shouldn’t you check the weather in Japan? In case you need a jacket?”

I had been to the South Pacific before and it was always unbearably hot and humid. A jacket was the last thing I would need. Besides, what does she know. I was the one that had been here before.

When I arrived, it was cold and raining. I figured it was an abnormality and would get back to normal soon. After spending two days freezing and wet, I decided I would have to break down and buy something to wear.

Normally I take a hoodie. It keeps you warm, if you put the hood up it keeps your head dry and the best part is it makes me look dangerous…ok, shut up.

On day three I ventured out into the rain with the intention to find a solution. I went into a clothing store to see what I could find.

The problem was the sizes. Everything was either small or medium. The small looked like it would fit a five year old and the medium wasn’t much better.

They have McDonalds here. Why haven’t the people started to Super size themselves like we do in the states? I couldn’t ask the sales woman for help because…I don’t know if you realize this, but they have their own language in Japan.

In fact, they have their own alphabet as well. It’s a lot of symbols and lines and I had no idea what any of it meant. The only things I could understand were the sizes and the price.

Finally, I found the only XL in the place for 2400 yen. I know, you think that’s pricey for a hoodie. Things must be expensive in the land where they make that television you watch and that kimono that you wear…2400 yen is 24 bucks.

I took it up to the counter to pay for it and she began to exchange pleasantries with me. The only part I really understood was “stupid fat round eye.” Well, at least she was still smiling when she said it.

At least when I left the store, the problem was solved. That was until I tried it on and realized a Japanese XL is a medium at best in the States.

The next day I squeezed into my new purchase and headed into Osaka. After a day of doing tourist crap, I spotted a sign that said “Brew Pub.” I stopped in with a guy I met on the ship.

We were seated and took a look at the menu. It was all in Japanese. I couldn’t just point at something, hoping to get a beer and probably end up with a plate of fish heads.

The waitress noticed the look of dismay on my face and handed me another menu. There were only three things I understood, Stout, Wit and IPA. Then she came over with three different size glasses. We pointed to our choice of beer and then the glass of the size we wanted. Who says there’s a language barrier?

Maybe I should have just done that at the clothing store. I could have taken a small hoodie up to the counter and then pointed to myself. Maybe they had a “Stupid, Fat Round Eye” size in the back. Come to think about it, I should have just listened to my wife.
“Hey, at least I can go home and annoy my wife.”