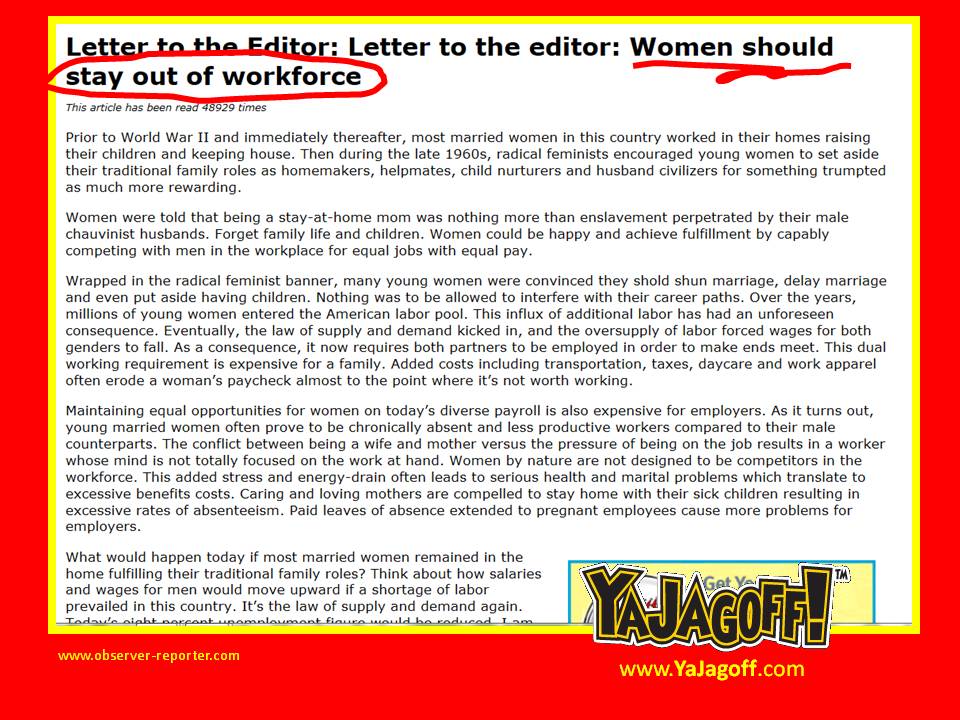 Are you ready to be set back 50, maybe even a hundred years???  We got this from KDKA Talk Show Host, Johnna Pro.

This guy, Donn Drummond, submitted a Letter to the Editor of the Washington-Observer newspaper about the reason for unemployment being so high.  His basic premise is:

Women in the work place are the cause of high unemployment due taking available jobs from men….1960 radical feminists are why women are in the work place…young married women often prove to be chronically absent and less productive workers compared to their male counterparts and …. if most married women remained in the home fulfilling their traditional family roles, husbands would more likely have the ability to earn living wages to support their families without the need for a second income.

Quick question, are there even enough men in the U.S. to fill all of the potential jobs?

Donny-Boy, not sure where the rock is that you crawled out from under but we’re thinking that your woman, if you have one,  probably needs to be seen at the UPMC/NFL concussion clinic from you whacking her over the head with your club and dragging her home by her hair each day after picking berries in the forest!!!  That opinion is older than the wood paneling and candy-red carpet in our parents so-called “den” and the mint green toilet/sink with the orange wallpaper that’s in the adjoining “powder room!”

Thank God you’re not the mayor of the City of Pittsburgh or one of the Allegheny County leaders.  If so, we would probably be CURRENTLY be in Renaissance NEGATVE 18..pulling the perfectly good plumbing out of the downtown buildings and replacing them with out houses as well as changing over the awesome food smells of Market Square with soot and carbon particles so that the town looks “manly.”

We could bore everyone with statistics why you’re wrong, Donny, but here’s the bottom line on why we disagree with your opinion. It’s sexist, ignorant and down right rude. We’re also scared as $%@# of the women in our lives if they found out we even thought of agreeing with you.

Okay big guy, back to the Keynesian economics vs Milton Friedman type arguments that we’re SURE a man of your mental capacity is capable of, Ya Jagoff!

Thoughts for Don?  Offer them below!