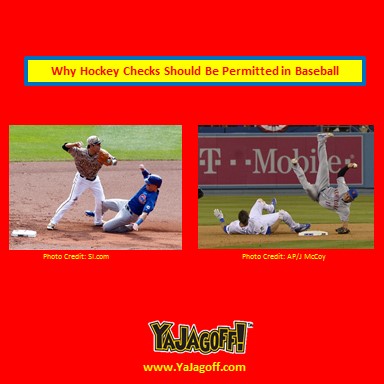 Listen, I know as much about the technical side of baseball as I know about the quantum theory of electromagnetism, Quantum Chromodynamics.  On the other hand, I do know B@#@ $h1% when I see it and, those two pics above are B@#@ $h1%.  Both slides resulted in significant injuries.  One, of courses is the Pirates Jung Ho Kang getting taken out.  The other is the Mets’ short stop going cole-slaw-over-fries after getting his leg taken out with a slide.

A right-fielder is running toward the warning track to catch a fly ball and BOOM…a guy from the opposing team jumps out from the wall and throws a hip check on him.

The second baseman, gets to wear catchers gear and can take lower his shoulder on the incoming runner…hopefully he has his head up.