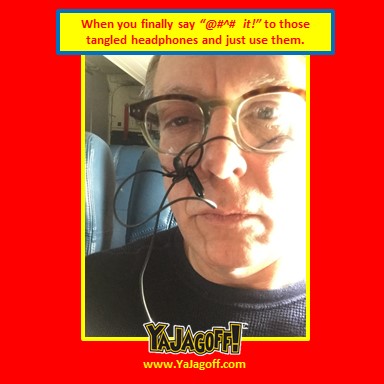 I’m not sure what happens to headphones when I put them in my backpack, but, they somehow come out looking the same way my Christmas tree lights look as I pull them out of the box from last year.  I was on a plane, there were too many people around and, after watching wrestling matches of the WWE, I started getting afraid that these things were ultimately going to slam me on my back, jump from the top of the plane seat on to my chest, landing with a knee or flying elbow and pinning my shoulders for a 10 count.

So I just said “____ it!” and put them on!  Them tangled on my face is a much less embarrassing visual than them pinning me in the middle of a jam packed plane full of people armed with smart phone cameras.

But here’s what I DO know… someone take a look at that knot… I swear to GAWD you could dangle 6 Navy Seals off of the Fort Pitt Bridge from that knot..

Headphones…. stop doing this to me, Ya Jagoffs!