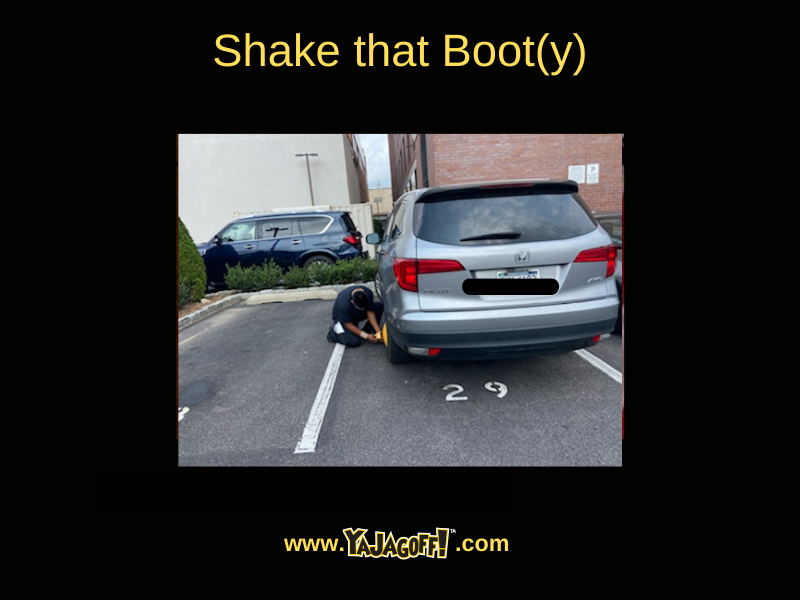 In typical John and Rachael style, we had to leave New York City by at least 10:30 a.m. to be home in time for the podcast that started at 6 p.m.  So that was one gas fill up that would surely include a bathroom break and potential snack snag.  A NYC boot on the Rennebeck tire foiled that plan.

There was a mix-up regarding our parking in the lot because you know you pay for parking in NYC?  Yah we knew but apparently we didn’t declare our vehicle upon arrival, so they didn’t account for our car in the lot.  So since it wasn’t accounted for, they threw a boot on it.

Okay fast forward Rachael’s slight tantrum and refusal to pay the actual amount to remove a boot.  Luckily the hotel manager realizes that it was their mistake for not getting my vehicle information and eliminates the boot removal fee.  Side note, he also reduced the parking fee for the stay.  But how long does a boot removal take?  Not long in NYC since hotels happen to have boot kits.

Next thing ya  know, a gent goes into a junk drawer and snags the tools and says follow me.  This is commonplace people.  Two and a half minutes. We made it home before 5 p.m. with two potty breaks, a coffee order and a gas stop.  Boot shmoot, ya jagoff!