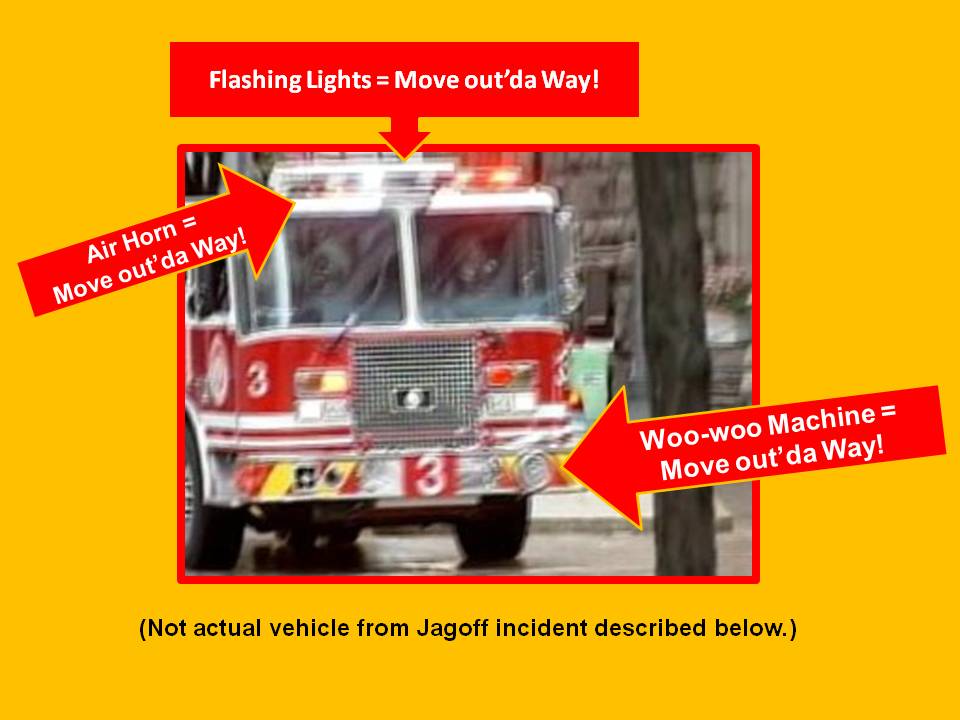 Just a quick review, for those who are NOT sure about what to do when an emergency vehicle comes up behind you (cuz you need this info to get through the rest of the post).  If you actually use youre rear-view mirror and see flashing lights in it OR if you hear a siren over your Clarks-Joe Grushecky-Wiz-shuffle-mix  OR if the HONK noise you hear is not syncing with the music and it’s not your buddies passing gas, IT MIGHT BE a fire truck, police car or ambulance coming!

And, by a show of hands, how many know that you are supposed to yield the right of way to that vehicle?  (How many of you did a pump-fake on a hand-raise cuz you realized you were only reading a blog post?)

So there we were stuck in traffic, getting ready to call someone a Ja….well, you know, because traffic was all tied up on Route 65.  But we had to back off because, it turns out, there was a car wreck – lights flashing, all kinds of stuff.  But WAIT… enter the subject of today’s post!

A City fire engine was trying to respond to the wreck – HONK-HONK, LIGHTS FLASHING, WHEEEEWWWWWW-WOOO-WOOP-YELP!  With all that noise, our man STILL chooses to not move his car so that the fire engine can get to the accident which is clearly visible from our point of view.  The fire crew actually had to get out of their truck, walk up to this guy’s car and tell him to move.  It was obvious that Mr. Ima Sittingrighthere didn’t want to move,  SO MUCH, that everyone around could see him yelling back at the fire crew!!!!!!

The driver finally moves his car just enough to let the fire engine through to the scene.  The fire crew does their thing and has a little, “Hey how’s the family? Where do I buy tickets to the Policeman’s Ball” kind of talk with the police at the scene.

It’s now time to open up the road for traffic and guess who’s waiting for Mr. Ima Sittingrighthere at the other side????  We’re not sure if he was given  a dozen or so comp tickets to the Policeman’s Ball,  or what, but he DID get a series of paper thingies handed to him after a lengthy discussion with the police.  He didn’t look pleased.

Seriously?  You don’t move for a big ol’ fire truck AND you think you’re gonna win this battle?

Mr. Ima Sittingrighthere, we couldn’t get a clear shot at a pic of you/your car that day but, if we would have, we would have probably used our CIA connections to enhance the pic so that EVERYONE recognized your face on this post.  Hopefully that inconvenient delay of someone’s tragedy didn’t cause you to be late for your man-mani/pedi appointment.  Actually, we’re gonna give you credit and say you were in a hurry because you were rushing home after taking your colonoscopy-prep medicine.  Not sure what they will find, when they DO scope you, but it’s pretty obvious that your HEAD is up there somewhere, Ya Jagoff!!

If you’re new here, WELCOME!  Take a look over on the right at the Categories of Jagoffs.  Feel free to submit one sometime.

In this article: City of Pittsburgh, Driving, Jagoffs