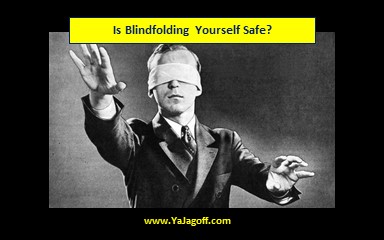 Just when we thought we hurdled the overboard hoverboard silliness, the next level of stupid raised its ugly head.  Teens were car surfing with Ubers.  Both are clearly dangerous and deadly, and there had to be a Public Service Announcement to stop doing these tricks.

Then tasting TIDE pods became a thing, but that is so 2018.  Luckily! But, 2019, with only three days in, started the newest nonsense…Bird Box mimicking on social media. The Bird Box Challenge prompted videos being shared on social media of people wandering around wearing blindfolds, trying to perform everyday tasks.

Yep, NetFlix, the movie powerhouse responsible for the movie craze “Bird Box” released the statement that it is not safe to basically ‘blindfold and live.’ The movie insinuates the end of the world with suicide resulting in looking at creatures outside, so the characters wear blindfolds. Ummmm key word?  MOVIE.

So, here is the Ya Jagoff Disclaimer: Don’t be a jagoff and watch movies and think you should act them out and then chronicle the actions on social media and then wonder why people think it is odd and write blogs about them.  Or how about…great movie, dumb move, jagoff!  Stop blindfolding day or night and doing everyday things because you will get hurt since those actions were done while on a movie set not real life. Perhaps rewrite the “Cat In The Hat” book referencing you should not cannot blindfold during the day or on a bay, not in a house or to a mouse…you get it.

So, take it from the super duper judgy panel at Ya Jagoff headquarters—you know the peeps who judge driving and parking daily…Do NOT blindfold and anything, it is not safe! It is not meant to do at home.  Come on, jagoffs even know this is the epitome of a don’t…so don’t be a MORON!