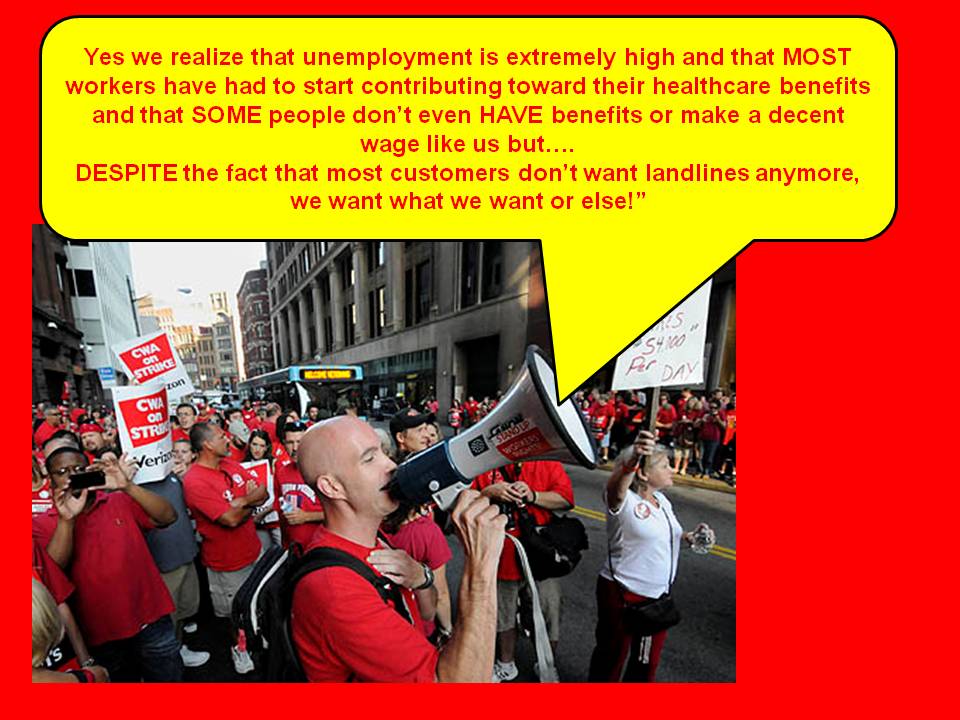 This blog calls out people/things that make Pittsburgh look bad.  Well, the Verizon strikers have finally pushed our button.  The final straw: they actually locked replacement workers in a building with chains and a padlock (see WTAE story here). REALLY??  This is like locking “Little Johnny” in the coat room back in grade school cuz he wore flood pants!

Let’s set the record straight on a few points first:

1) We are not Union haters

2) We hate when corporate Jagoffs take advantage of the workers i.e. US Airways employees or move jobs overseas

4) Our hardly-ever-used landline house phone is still on the wall ONLY because we don’t know what else to hang in its place (like most houses, we don’t really use it)

5) We believe the Verizon workers have the right to strike

On the other hand, is THIS how ADULTS should act ESPECIALLY when trying to be taken seriously in a work disagreement?

Is yelling, pushing, flashing muscles, intimidating other adults, that are trying to look out for their own families, REALLY how you want to be seen on TV or are some of you auditioning for the next West Side Story run at the Benedum Center or even the Batman movie fight scenes?

Is the fact that the CEO of Verizon makes more-than-you-think-he-should  a reason to elbow and spit on the same co-worker that brought in the awesome buffalo chicken dip and pita chips for the “Super Bowl Friday” Steelers party 6 months ago?

Oh wait, are you the same adults that are supposed to be teaching “NO BULLYING” to the kids?  This isn’t the steel strike of 1919!!!

Verizon landline workers, do what ya gotta do by striking but ALSO think of where these groups are today:  the typewriter builders who refused to see the PC coming and the abacus builders and Chismbop salesman who refused to recogize the electronic calculator. (Ya might wanna be a little flexible.)

We say, stand around, wave your signs, chant your chants and be proud and holdtrue  to your beliefs but there is NO RATIONAL JUSTIFICATION you can make, as adults, for your embarassing Lock-Johnny-in-the-coat-room-DePants-Jeffy-the-geek-Push-the-books-outta-the-freshmans-arms-Wet-willy-Mary’s-ear-Give-Jimmy-a-wedgy-Steal-Alan’s-lunch-money-Slap-a-KICK-ME sign-on-Sam-Shove-Louie-in-a-locker-High-school-bully activity, YA JAGOFFS!

As a side note:

We agree, the CEO probably needs to suck it up and take a pay cut too but, our guess is, most of you who are begrudging the CEO’s $20 million a year for being responsible for over 100,000 employees will be the same people that would complain if the Steelers didn’t give Ben Roethlisberger or Troy Polamalu $45 million dollars to play 16 regular season football games!