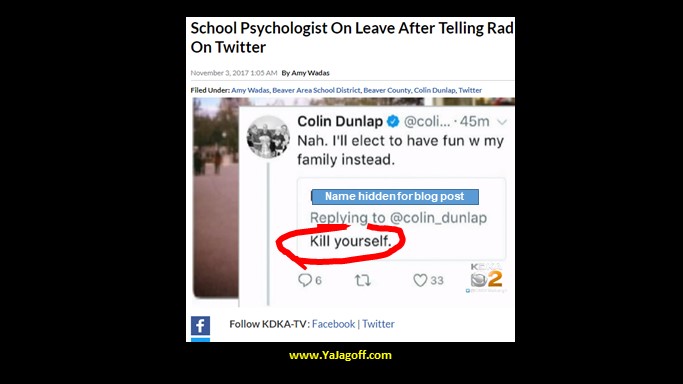 Not sure if that is statistically true but, it certainly is a hypothesis that would play out very well when looking at stories posted on THIS blog alone.

A local school psychologist saw a pic of 93.7 FM The Fan’s morning radio morning show host, Colin Dunlap in lederhosen on twitter. Dunlap was on vacay at Disney with his family, including his daughter who is currently battling cancer. At some point, the school psychologist, referring to the outfit pic, tweeted, “kill yourself.”

It should be noted that, as this blog post was being written, the school psychologist posted a public apology for the initial tweet and the follow-up tweets. Because of that, we blocked his name from the tweet but felt that it still fell into the realm of what happens here on the blog.. post Jagoffs…people that are embarrassing the rest of us Pittsburghers.

Well, unnamed school psychologist. even if that was a joke that was pretty crazy, huh? I mean, the only people that have a crazier sense of humor than a psychologist might be Human Resources professionals.. when they get in a group of peers behind closed doors, loooook AHT!  OK, once again, not fact but.. ya gotta agree, those people are sooooo plain vanilla that, it’s basically a given that they get crazy, foul-mouthed and tell dirty jokes after all the shiney-happy-people-holding-hands hours that they put in on a given work day!

Might wanna go lay on your own unnamed school psychologist couch! Good luck working this out in your own life. We recommend some type of I-was-drunk-tweeting-from-a-friends-bachelor-party-in-Singapore-which-is-way-more-nuts-than-anything-in-Vegas-with-an-I-hate-Cleveland-group-of-people-and-someone-said-the-Steelers-suck-and-did-something-stupid alibi.

That will help ya a bit but not sure what’s gonna get your personal pride back. Twitter is NOT a dark place… accept for those who don’t think before they type….Ya Jagoff!