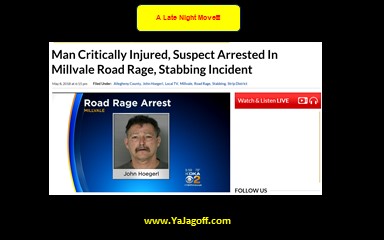 Let’s get through this story quick because it tosses all of the elderly driver stereotypes out the WINDA (as my mom would say).

From my own driving experiences, when I get behind a senior driver I become somewhat angry because they are driving slowly, interpreted as “have no place to go while I am behind them and have to be somewhere, that is 24 minutes away, in 7 minutes!”

Two 60-year old Route 28 drivers got into a little road rage incident with each other calling the other one out, fighting on the streets of Millvale and, eventually, leading to one of them being stabbed.  Yep… STABBED..stab, stab, stab, stabbity stab, stabbed! See the real story on the KDKA-TV website.

Well, don’t know if the argument and ensuing, alleged scuffle, was a result of one guy’s turn signal being on for an eternity but the fact that each were in their 60’s, ya cannot poop-poo this fact and  objectively rule it out! I mean, have ya seen a group of 60+ men in the Mickey De’s around morning pounding down free coffee refills?

Guys… we love this new concept of “senior living” which includes staying active as long as possible. But do we really need to be considering senior-thugary or senior series MMA battles as how to stay fit as your body gets older and parts start to droop? But does thugary or senior-male MMA fighting really seem worth the risk?

Ya both had red pickup trucks. Ya both are about the same age (emotionally about 15 years old). So you had more in common than you initially thought but, instead, you got involved in a road rage incident sparring each other?

Hey Stab-stab-stab-stabbity-stabhabby-John, good luck with your legal defense on this one. Ya might wanna just team up with each other and then develop highly believable alibi like… “we stopped at Mancini Bread and, before we could eat it, we had to stop and get 20lbs of butter and then.. While we were racing home to see who would be the first one to eat the fresh bread and butter, and the knife just kinda slipped! Judge, you certainly know the passion around warm Mancini bread in your car!”

Laugh all ya want Johnnyboy… but don’t knock it! It has a WAY  better story line than what REALLY happened between you two,  YaJagoff!