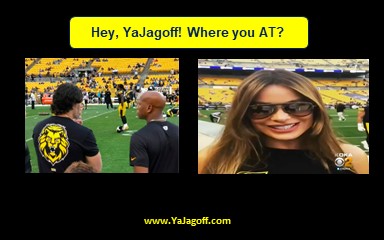 Rachael, cohost of the YaJagoff Podcast had to step in because.. well… John is… well.. you’ll see!

The team at YaJagoff prides itself on being in the know-how and up on trending news.  We have been lucky enough to know things like when the Big Mac was celebrating its milestone day, and more recently smart enough to pick out the show-stopping genie who pops out of a lamp in Aladdin.

But, our hard-hitting journalistic skills are lacking in the gossip department.  Maybe not “gossip” because that sounds soooo Enquirer, water cooler chatter may be appropriate. We don’t have that a ha! Peep in our posse who spots when Billy Gardell comes to the Burgh early to enjoy an Ernie Ricci sausage before a show, or catches a Michael Keaton trip to Pittsburgh to shop at Tanger Outlets before the holidays. Are we missing the boat? I mean the traditional news stations captured two major sightings this week…Tom Hanks at Starbucks in Greensburg and Sofia Vergara and Joe Manganiello at the Steeler game just last night.

KDKA, WPXI and WTAE, we gotta give credit where credit is due.  But two of us reporters from Ya Jagoff saw David Johnson last Saturday night at the Night Market in Market Square.  I mean, we even sang Chestnuts Roasting on an Open Fire with Franco Harris once, oh, and Jaromir Jagr let us drive him to a signing one time.

Come to think of it, this celeb recap was therapeutic for sure.  YaJagoff does have the celeb radar and tends to rub elbows with high profile people.  We missed Tom, Sofia and Joe, but John doesn’t like coffee so the Hanks sighting was out, and Sofia and Joe were enjoying the Steeler game inside the stadium and John was in the parking lot surveying the peter parkers to blog about….but the next blog will perfectly profile some goof spilling coffee while haphazardly parking at Heinz Field.  Way to get that water cooler chatter, YaJagoff!