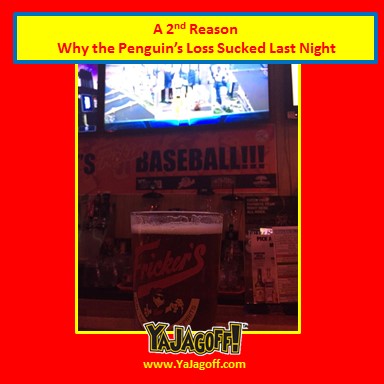 Do you know why the Pen’s loss to the Rangers last night really, really sucked?

Because I was out of town… behind enemy lines… deep into North Western Ohio.  My hotel barely had reliable internet so I wasn’t shocked to discover that they did not have the NBC Sports Channel.  So I found a bar called Frickers.  Not a bad place.  Food is decent. Beer is cold and the TV screens, at least the main 3, are huge.

So there I was… at the bar.. sitting in front of the one 3 big TVs that the Pens game on.  The other two had  the Chicago Bulls game and the Detroit Tigers game (Northwest Ohio is more Detroit fans than Cleveland fans).

I nestled in with a beer and ordered the cheapest thing on the menu…. chips and salsa.  I made that last until the end of the first period.

Just then, some Cleveland-ite approaches the bartender and requests, on behalf of her table, to have the hockey game taken off so that her group can watch the Indians game. I looked straight at that bartender as if I as Max Lapierre staring down Marc Staal.  Game on.

Well, unlike the Pens, I pulled out all of the stops. I ordered more food than I needed over the next 2 periods to show my support for keeping the Pens game on.  Cheese sticks, more beer, boneless chicken wings… you name it… I ordered it.  The problem, is I showed up..put my mouth where my money was and the Pens… well…. they DIDN’T show up.. until the third period.

Hey Pens…I sure hope you show up with heart and passion for game 4 because, not only did that bar seat cost me a fortune in $$ to sit there for 3 periods (2 of which you didn’t show up)… but I’m fairly certain I’m gonna need a heart catheterization from all the unnecessary fried food I ate on your behalf, Ya Jagoffs!