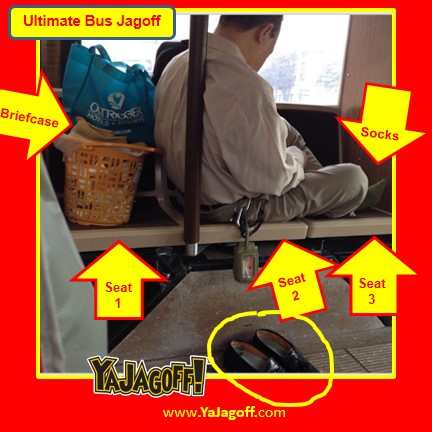 Oh.. the word is spreading about catching Jagoffs!!

Yesterday, the blog had a mention in the Pop City Media on-line publication.  In the meantime, thanks to some traveling and Jagoff Disciple-ing (yeah I made that word up), we have Jagoff Catchers all over the place.

The pic above came from Hawaii.  I have taken the liberty to use the Jagoff-estrator to point out the various aspects as to why this Hawaiian public transit passenger thinks he is in his very own living room.

I hope this guy paid for all three seats.. #yajagoff #rude

Guy, seriously, if you didn’t want someone sitting next to you you didn’t have to take up three seats… the mere fact that you took your shoes off to air out your Parmesan-cheese smelling socks, were talking on your cell phone, obviously cutting real estate deals with Donald Trump, while on the bus, you have an 82-pound beach-basket lunch pail and mid-day hair products bag bigger than Kim Kardashian’s, AND a work I.D. that looks like a hand grenade attached to your belt  with a rubber-coated steel cable, is MORE than enough reason to have NOBODY sit next to you on the bus.

If you get this comfortable on a city bus, I’d had to see ya on a plane ride… I guarantee there would be undies and toe-nail clippings on the floor by within 60-minutes.

If you’re going to continue to ride the bus like this, at least bring your 3 cubicle walls with you so we don’t have to be witnesses, Ya Jagoff!