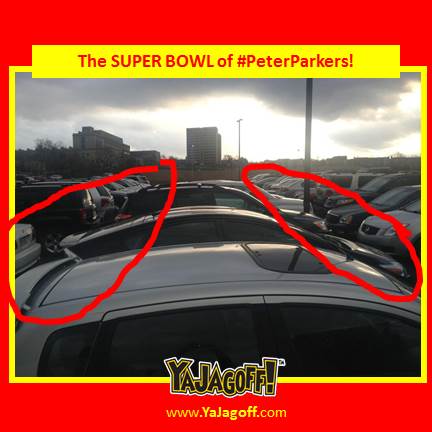 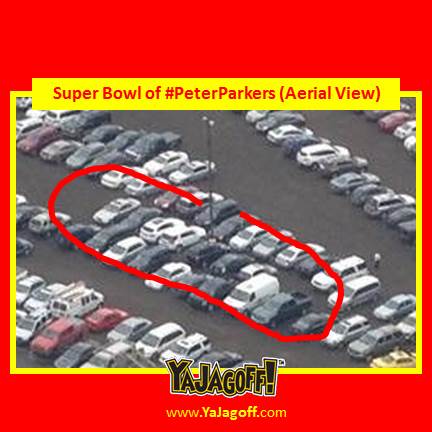 This made me giggle more than dreaming of watching a Duck Dynasty Marathon on a 25-foot screen with the entire Pittsburgh Penguins team while getting a foot and back massage!!!

Here are the tweets that came with the pics from the “old Civic Arena” lot:

In Bingo, this is pretty much a full card. In #PeterParking, this is INDEED the Super Bowl! This might be the best evidence to prove that most drivers, before getting their first cup of work coffee, pretty much have their head deeply implanted into their ARSES! There is more Jagoffery to spread around in this pic than there is Scar Cream in Kate Gossellin’s (Kate plus 8) medicine cabinet.

These cars look like an organized version of the Pymatuning Spillway (all those carp jammed up).

And, speaking of the Spillway, if you are one of the unfortunate ones to get out of work early and are parked in the Monkey-In-The-Middle spot, about the only way you’re going to get your car out is hope that it has a hankering for bread-balls and will gladly crawl on to the back of another car while you tease it with a handful of stale Mancini slices, Ya Jagoffs!!!!

Thanks to @Pantster from Twitter for being our Honorary Jagoff Catcher today!!

In this article: Jagoffs, Parking, Pittsburgh, Pittsburghese, Ya Jagoff, Yinzers