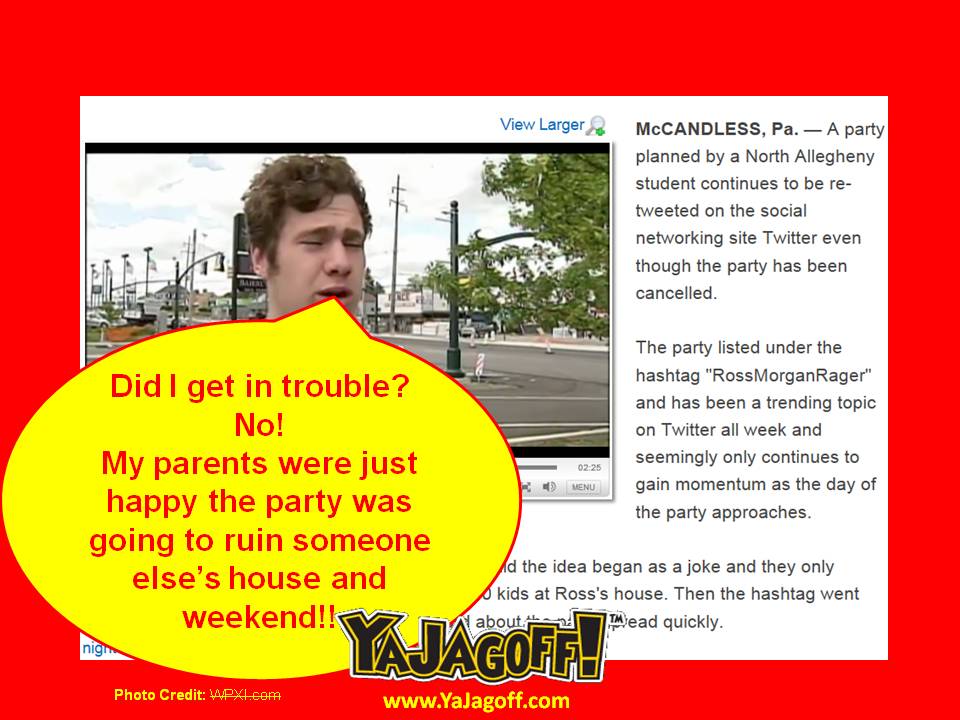 Why are we writing this story?  First, it’s from Pittsburgh and it made for embarassing national news.  Second, it was hugely viral and, mentioning could help our ratings!!! (at least we’re honest!)

One other note, notice how we applied Trashy Political Ad Principle #7 on the pic, we chose a pic of the kid responsible, that made him look asleep!!!

So, if you haven’t seen the news or are not on Twitter, here’s the story summary (full story HERE on WPXI.)

A kid from North Allegheny High School was going to have a party for some friends at his house while his parents were away.

Some of his friends chose to do the kid a favor to help with attendance, so they Tweeted the hashtag, #RossMorganRager.

The next thing you know, #RossMorganRager was trending nationally and, eventually, internationally

So many people were trying to find the party that, Ross Morgan and his parents had to vacate their house for the weekend AND, they had to hire off-duty police officers to watch the house all weekend.

So many potential Jagoffs here… the kid that was going to have the party, his buddies that chose to invite other people cuz they wanted to be cool

His buddies that are now considered cool, like Mark Zuckerberg, for their unique approach to get chics to think they’re cool

The Twitter Jagoffs who got the hashtag wrong and started tweeting #RossMorganRanger (If their would have been a party, they would have missed it!)

As an aside, the one thing we learned early on in our high school career was NEVER have a party at your own house.  That way you’re never stuck spending your college money trying to repaint, shampoo carpets, fix broken hand railings and eradicating the pungent odor of urine from your front lawn before your parents come home from their weekend get-away.

Another aside, if this would have been us in our high school days and our parents found out we were on the news, they would have been on camera with us, tugging and twisting on the short hairs of the back of our neck as we spoke!

So to the dudes that tweeted #RossMorganRager, thanks a lot for killing everything we said in our presentation that social media “is not!”

In the meantime, could you please do us a favor and tweet the following hashtags:

Now that the world is following you, we might as well leverage your fame, and it’s a helluva lot easier of a punishment than going to the chalkboard and writing, “I Must Not Send Inappropriate Tweets” 1,000 times, Ya Jagoffs!