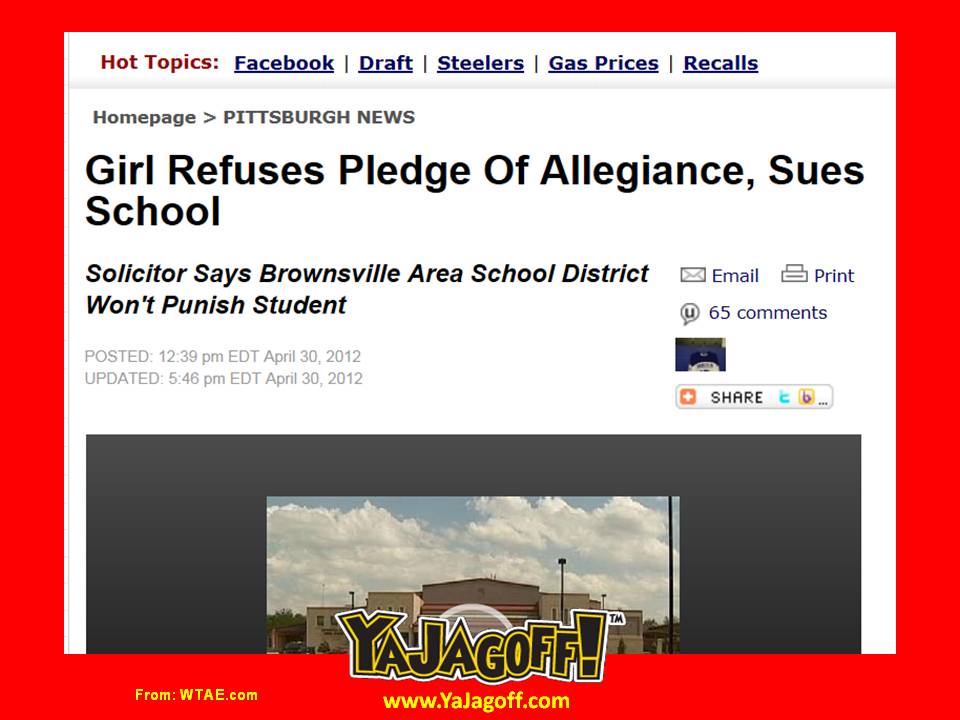 This is an easy one.  Yes, there are huge things wrong with our country… sleazy politicians, creepy business owners, lazy government workers…BUT.. we believe these people are in the minority (that whole one bad apple thing). Most people aren’t sleazy, creepy or lazy and, despite its issues, we wouldnt want to live anywhere else.

So a Brownsville Area High Schooler refused to stand for the Pledge of Allegiance. She chose to sit. (WTAE Story HERE).  The student was disciplined and is now suing the School District. She is being supported by her parents.

WHOOAAA!!! This stuff makes us crazy.

Even if you make this NOT about honoring the country with it’s “pledge”.. the country in which you live safely and educate yourself (which seems kinda crazy) but this IS a free country.

What if we make it about students… S-T-U-D-E-N-T-S, i.e. KIDS that want to buck the rules of an organization like a school and the parents who DON’T say, “Shut the hell up. Go to school and follow the rules!  If you don’t like them, educate yourself, get some experience and work to change them WITHIN THE RULES.”  Instead, these parents say, “Let’s SUE SOMEONE!!!!!!!”

Sure, you can make the case that if, MLK hadn’t bucked the rules, our country would STILL be light years behind regarding equality.

And parents, ever hear of the word “NO” or of being an actual “parent” that teaches their kids to listen to rules and authority and that they shold work within the rules given????????????

We say, go ahead and sit down for your country’s Pledge of Allegiance.  Just be sure that, when you sit down, it’s on a plane that’s taking you to the country that you believe is a better one in which to live, Ya Jagoff!!!!!!